When side effects from radiation for prostate cancer left Bruce Burton anemic and worn out, he found an answer in Hyperbaric Oxygen Therapy at Regional One Health’s Wound Care Center.

For Bruce, it made a huge difference, giving him his energy back and allowing him to return to the family events and hobbies he loves.

Bruce Burton will be the first to tell you it’s good to have a doctor in the family, and to have access to state-of-the-art medical care close to home.

After being treated for prostate cancer, Bruce developed radiation proctitis, bleeding related to radiation treatment. When his daughter, a physician and department chair at the renowned Mayo Clinic in Rochester, Minnesota came for a visit, she sounded the alarm.

“She was sitting on the other end of the sofa from me and said, ‘You’ve got to see a doctor. You’re anemic. You’re as white as a sheet!’” Bruce, 82, recalls.

When he had a blood test, his iron level was dramatically below normal. “She contacted some colleagues and asked them about their experience with that, and they told her they had the best results with hyperbaric oxygen treatment,” Bruce said.

Bruce was eager to try anything that could relieve the bleeding and the constant feeling of being tired and rundown. His research on hyperbaric oxygen therapy led him to the Wound Care Center at Regional One Health.

Regional One Health’s Wound Care Center is home to the only multi-place hyperbaric oxygen chamber in the State of Tennessee. Dr. Tony Alleman, medical director for wound care and hyperbaric oxygen therapy, treats patients in the chamber for a wide range of conditions, including diabetic wounds, burns, traumatic injuries, and damage related to radiation. 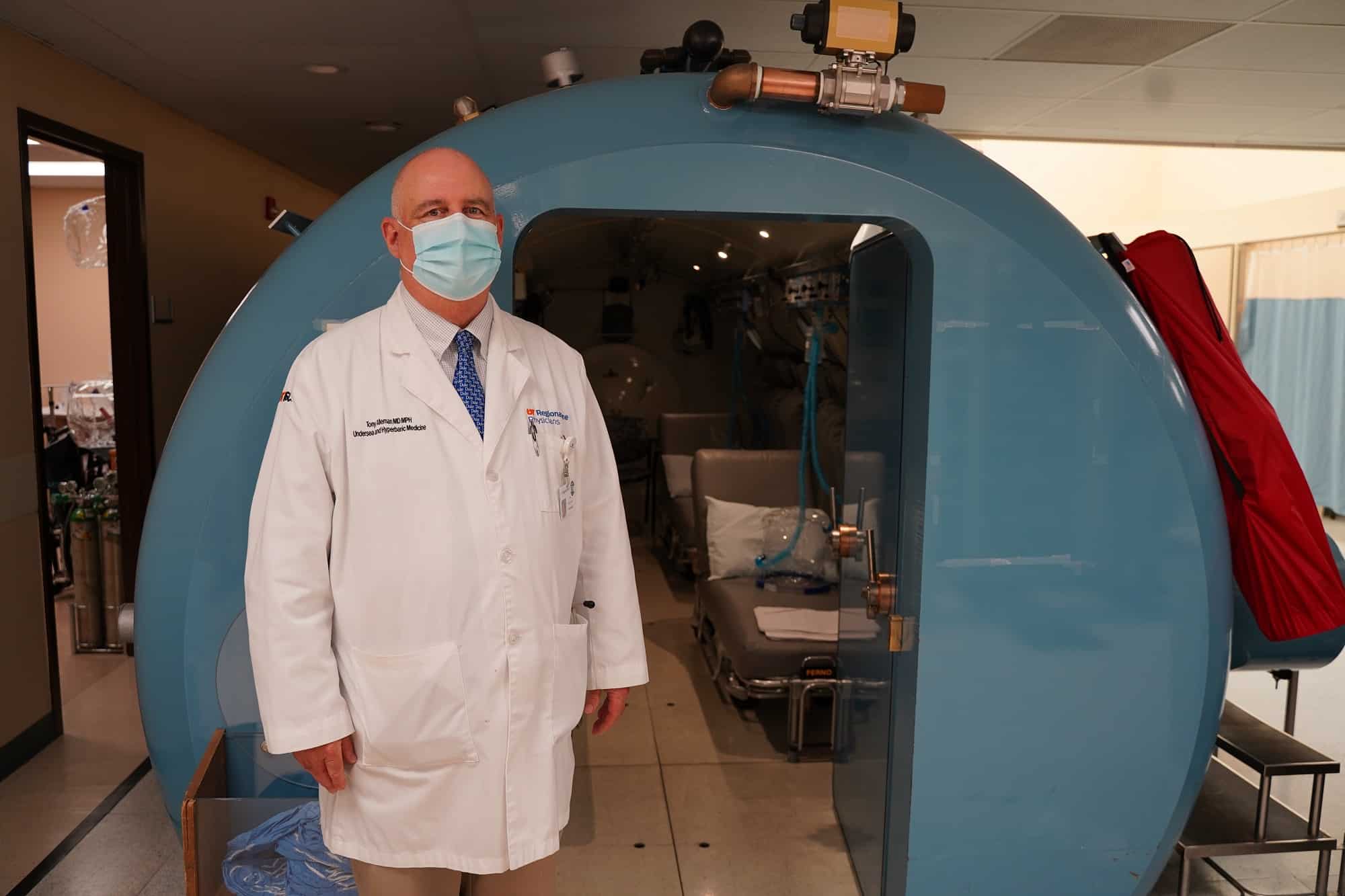 “Hyperbaric oxygen therapy is a wonderful treatment for a very diverse group of conditions. In many cases, it offers a patient their best or even their only chance at recovery,” Dr. Alleman said.

“After a certain number of treatments, patients can actually grow new blood vessels, and that extra oxygenated blood flow can help heal wounds and other conditions.”

For Bruce, Dr. Alleman recommended a series of 40 treatment “dives.” During a dive, patients spend about two hours in the chamber, which looks like a giant submarine, and are exposed to 100 percent oxygen under pressure. That delivers more oxygen to their bloodstream and sparks their body’s own healing process.

Treatment is painless and non-invasive, and patients can read, watch TV, and even sleep. For Bruce, the experience was positive on every level.

“I can’t say enough about the staff. I’ve never been around a more impressive group. They are really dedicated,” he said. “Dr. Alleman was always considerate, and Melissa, the nurse who attended to me, was the kindest, sweetest, most patient person in the world.”

He also got to know some of his fellow patients. “One of them was an Ole Miss fan and I’m an Arkansas fan, so we’d go back and forth. I didn’t discuss my problems and he didn’t discuss his, but everybody there was really enthusiastic about the treatment,” Bruce said. “I actually kind of miss going there!”

What he doesn’t miss are the symptoms of radiation proctitis.

“I have had very little bleeding since my hyperbaric oxygen treatment,” Bruce said.  “It helped my overall health – anything that was going on with me that was negative, it improved. After the treatments, I was full of energy.” 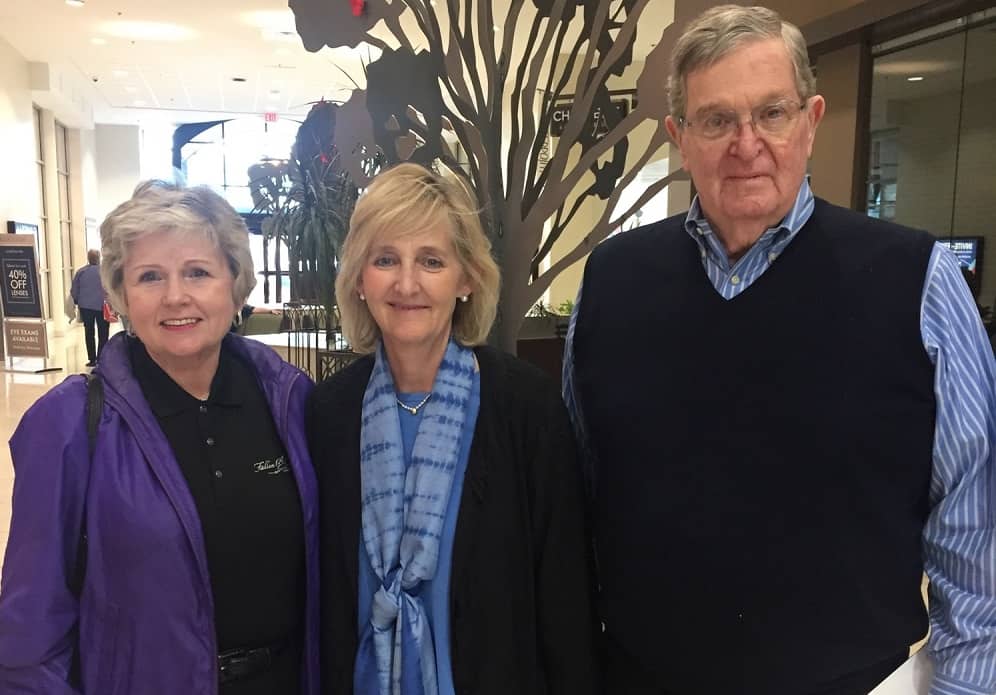 For Bruce, Hyperbaric Oxygen Therapy allowed him to get back to enjoying his family and hobbies. “It helped my overall health – anything that was going on with me that was negative, it improved. After the treatments, I was full of energy,” he says.

That gave Bruce a chance to return to the things he loves. “I finished treatment on a Tuesday and went quail hunting that Thursday,” he said.  “I was really, really down when I was anemic. This made life much more pleasant, and my psychological attitude is better too.”

He has been able to get back to exercising, and he’s enjoying time with his family, even making the dressing for their big Thanksgiving meal.

Now, he wants other people to know that hyperbaric oxygen therapy is an option for a wide range of conditions. He noted the symptoms he dealt with are common side effects of radiation for prostate cancer, so he knows there are other people out there who can benefit.

“I’ve talked to a lot of people about it, and they say, ‘Hyperbaric what?’ If it hadn’t been for my daughter I would have never known,” Bruce said.

“It’s a wonderful solution for problems that a lot of people have, and I would recommend it to anybody. It beats by far any experience I’ve had with other hospitals.”

Learn more about the Regional One Health Wound Care Center and Hyperbaric Oxygen Therapy at https://www.regionalonehealth.org/firefighters-burn-center/wound-care-and-hbo/