When Kanika Armour learned she was pregnant with her first baby, she had a lot of questions: what to expect, whether she was having a boy or girl, how to avoid an epidural or C-section.

That’s natural for a first-time mom, and Kanika and husband Robert Sr. wanted the kind of personalized care that would make their experience special. Kanika’s mother-in-law urged them to visit Regional One Health, where she helps deliver babies as an OB/GYN Tech, to see a doctor whose commitment to her patients had impressed her time and time again. 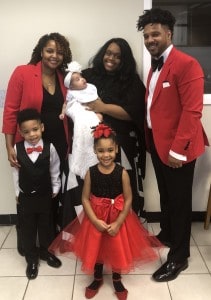 Dr. Danielle Tate is like part of the family after helping to deliver all three of Kanika and Robert Armour Sr.’s children – Robert Jr., Raelyn and Rachelyn.

Kanika and Robert found themselves meeting with Danielle Tate, MD, FACOG, who performed an ultrasound and shared the news they’d been waiting for: they were having a baby boy.

Dr. Tate followed up the next day. “She was worried she hadn’t given us the one-on-one attention she wanted to, and told us, ‘I want to give you a better experience,’” Kanika recalled.

Dr. Tate remembers that phone call, noting she worried she’d been rushed with Kanika: “I have a very simple approach, and that’s treating others like I would want to be treated,” she noted. “I put myself in the patients’ shoes to have the experience that I would want and that they deserve.”

That goes for women like Kanika, who had a healthy pregnancy, and patients Dr. Tate sees for maternal-fetal medicine and high-risk obstetrics. “I help with any sort of out-of-the ordinary complications in pregnancy, whether from mom’s side or baby’s side; and I do routine OB/GYN care and pregnancies as well,” she said. “I try to put them at ease and make them comfortable, and allow them to enjoy their pregnancy despite whatever might be going on.”

Her approach impressed Kanika immediately. “I was kind of bold with her,” Kanika laughs. “I asked her, ‘Would you become my doctor?” 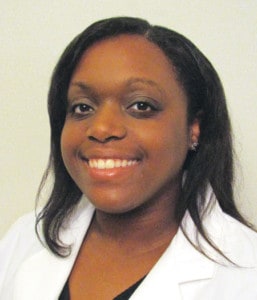 “I have a very simple approach, and that’s treating others like I would want to be treated,” Dr. Tate says.

When it came time to deliver little Robert Jr., she knew she had made the right decision. “When it’s your first child, you’re afraid of the unknown,” Kanika said. “I had stressed I did not want an epidural or a C-section. But I’d gone 13 hours natural, and stayed at 7 centimeters and would not move. I was miserable. It was kind of the point where you’re almost out of your mind.”

Kanika agreed to Dr. Tate’s recommendation for an epidural. “She told me, ‘I want this to be a pleasant experience for you, and it’s not pleasant anymore,’” Kanika recalls.

Still, she was nervous: Per hospital policy, Robert couldn’t be in the room for the epidural, and Kanika felt alone and scared. “I was so nervous, but Dr. Tate said, ‘I’ll stay in here with you,’ She kept saying, ‘You’re OK, you’re OK.’”

Dr. Tate went above and beyond again when Robert Jr. was born. He was taken to the NICU for a small cyst that turned out to be minor, and while Kanika was grateful he was getting the best care, she was disappointed she wasn’t gazing at her little bundle of joy.

It was her physician who came to the rescue. “Dr. Tate went down to the NICU and took a video on her phone so I could see my baby’s face,” Kanika said. “It was amazing that she did that.” 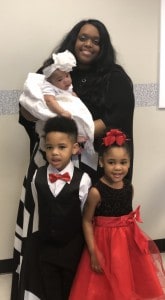 “If there were more people like her, not only would healthcare be better, this world would be a better place,” Kanika says of Dr. Tate.

For Dr. Tate, it’s all about empathy. “We’ve got to get more into the touchy-feely side of medicine, because that’s what our patients need. When you can get on that level with patients it makes their care so much better and their commitment to their own care so much better.”

Kanika’s experience with Dr. Tate was so fantastic she was ready to add to her family with little Raelyn, born when Robert Jr. was a little over 1. They’re now busy 4- and 5-year-olds – and in November, they helped mom and dad welcome the newest member of the family, Rachelyn. Kanika laughed about how Raelyn tells everyone, “I’m gonna teach her how to be a big girl!”

With Dr. Tate again at her side, Kanika’s experience at Regional One Health was so exceptional she’s now giving the advice her mother-in-law gave her. “Whenever I know anyone’s pregnant, I tell them, ‘I know the best doctor,’” she said. “If there were more people like her, not only would healthcare be better, this world would be a better place. She’s a beautiful person inside and out.”

For Dr. Tate, being invited into families like the Armours’ validates why she went into medicine.

“It’s heartwarming when patients think enough of me to trust me with their pregnancy and their child and their health,” she said. “When they send pictures and invite me to a birthday party, it makes me feel like I’m part of the family. It verifies my purpose and lets me know I’m making a difference, which is why I went into medicine in the first place.”