An intestinal obstruction is painful and potentially dangerous, and typically requires hospital care. However, you won’t necessarily need surgery.

Many blockages can be resolved with a non-invasive procedure, and patients often never have a recurrence.

If you’re having problems like stomach pain and an inability to pass bowel movements or gas, see your provider for diagnosis and treatment.

If you suffer an intestinal obstruction, it’s painful and potentially dangerous. While you’ll probably need to go to the hospital for care, you won’t necessarily have to go through surgery.

Nabajit Choudhury, MBBS, MS, is a general surgeon at Regional One Health. He can operate on everything from hernias to gallbladders to the appendix, he also knows when surgery can be avoided or delayed. In those cases, he helps patients heal using other methods.

“If I see that a patient’s condition can be treated without surgery, I give them that option,” Dr. Choudhury said. “A lot of patients have anxiety about surgery, so if there’s a way to address their condition without operating, I discuss that with them.”

See a provider if you have symptoms including abdominal pain, nausea and vomiting, inability to pass bowel movements or gas, and abdominal bloating and distension. Your physician will use imaging and various tests to determine the cause and severity of the blockage.

If possible, Dr. Choudhury tries a non-surgical procedure first. Since scar tissue from surgery can actually cause obstructions, doctors like to avoid operating and causing more scarring. 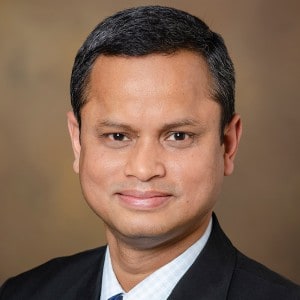 Nabajit Choudhury, MBBS, MS, is a surgeon, but he also discusses non-surgical treatment options with his patients. “A lot of patients have anxiety about surgery, so if there’s a way to address their condition without operating, I discuss that with them,” he said.

Patients are sent to the hospital and have a tube run through their nose to empty the contents of their stomach. This allows the bowel to rest for a day or two, Dr. Choudhury said. That helps the obstruction get better on its own, and patients quickly feel much better.

Patients go home shortly after the blockage resolves itself. They should avoid strenuous activity and follow a liquid or soft food diet for several days.

Many patients never have a recurrence. If a patient does continue to experience blockages, they may ultimately need to schedule elective surgery, Dr. Choudhury said.

Doctors also turn to surgery if the non-surgical option fails to get rid of the blockage.

“In most of these cases, I’m able to operate laparoscopically, which means there are just small incisions near the site of the obstruction,” Dr. Choudhury said.

After laparoscopic surgery for an intestinal blockage, many patients can leave the hospital in two or three days. At home, they’re encouraged to get up and move around as much as possible, but should avoid heavy lifting or strenuous activity until they’re cleared by their physician.

Other bowel obstructions require more extensive surgery. “If there is a tumor or a growth, or the intestine is twisted, we’ll likely need a larger incision near the middle of the abdomen,” Dr. Choudhury said. “In that case, it’s major abdominal surgery, and it takes a lot longer to recover.”

During surgery, he treats the cause of the obstruction and removes any damaged tissue. Patients can require ongoing treatment. 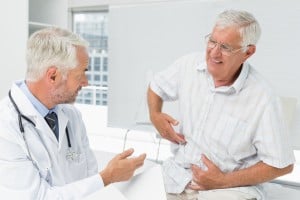 Symptoms of an intestinal blockage include stomach pain and an inability to pass bowel movements or gas. By seeing a provider right away, patients can often avoid a major surgery.

However, some patients need a colostomy or ileostomy, which involves removing the damaged portion of the intestine and sewing the remainder to an opening in the skin. These patients will need to use an ostomy bag, which collects fecal waste outside the body.

Surgeons may be able to reattach the intestine once the patient heals.

If the intestinal blockage is due to a malignant tumor, patients will be placed under the care of an oncologist who can develop a comprehensive cancer treatment plan.