Walter Tuggle was in a mechanical wheelchair after a spinal stroke, having lost use of the right side and much of the left side of his body.

He faced significant challenges, but he had incredible willpower and family support on his side.

That, combined with the expertise of Regional One Health Physical Therapist Assistant Andrew Wofford, gave Walter everything he needed to reclaim his independence through rehabilitation therapy.

As he lay in a hospital bed after a spinal stroke, Walter Tuggle could hear the doctors talking to his wife Sally. They told her he might not make it, and that if he did, he’d never walk again and would require lifelong medical care.

Walter thought back on 40-plus years of marriage, their two daughters and their growing group of grandkids and made a vow: he wouldn’t let that happen.

“When I was able to focus, I said, ‘I hear what you’ve been telling my wife, but God cares, and he’ll never give up,’” Walter said. “They say you just have to give God something to work with. I decided I was going to give it all I’ve got and let God do the rest.”

For Walter, that meant finding physical therapy that could help him reclaim his independence. A friend referred him to Regional One Health’s Outpatient Rehabilitation Center, where he started working with physical therapist assistant Andrew Wofford, PTA. 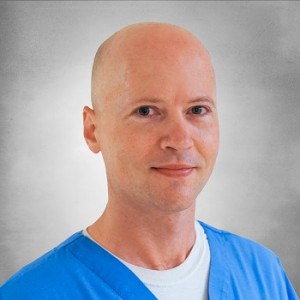 Walter was in a motorized wheelchair, having lost use of his right side and much of his left side. Initial testing showed little nerve and muscle activity in his legs.

The challenges were steep, but Walter had some key factors on his side.

He was within the three-month window for the most functional return. He had strong support from family. And he had the sheer force of his own will.

“At one point, a psychiatrist asked him if he was depressed, and he answered, ‘Who has time to be depressed?’” Sally recalls. “His philosophy has always been that he had the will to get better.”

Prior to his illness, Walter was an avid cyclist, drove a truck for a living, and spent his free time with his family. Now, his family was pouring their hearts into taking care of him – and while he was grateful, he wanted to return to the way things were before.

“I wanted to get back to my normal lifestyle. To do that, I had to focus and discipline myself,” he said. “Andrew steered me in that direction.”

For Wofford, having a motivated patient like Walter is half the battle. “I can give people ideas on how to work through a program, but patients need to have the motivation to want to succeed,” he said. “Walter brought his motivation with him: to take the stress off of Sally and his family.” 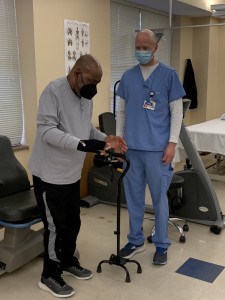 Walter started with non-weight bearing exercises, then moved onto practicing mobility and balance as he grew stronger. He went from a motorized wheelchair to a manual wheelchair to a walker to a cane.

Because Regional One Health is home to the Mid-South’s level-1 trauma center, therapists have specialized knowledge and experience in working with patients with spinal cord injuries.  Wofford developed a comprehensive plan that would not only rebuild Walter’s strength and mobility but reteach him how to walk and do day-to-day activities.

They started with gravity elimination exercises, where Walter would lay on a table and slide his legs in and out; up and down. There was a lot of repetition, and progress came slowly those first few months.

But as Walter’s nerve conduction returned, it brought gains in strength and muscle response. He moved onto weight-bearing exercises, then exercises to improve mobility and balance.

Along the way, the two men built solid communication.

“As he encountered problems in his daily life, he’d tell me, and we’d work through them,” Wofford said. “At one point, he wanted to use his manual wheelchair with his truck, so we figured out how he could safely transfer from the elevated truck to the lower chair. We simulated it with steps and parallel bars, and then he went out there and did it just like we’d worked on.”

He also coached Walter to do therapy exercises on his own. “There are a lot more hours in the week than the hours you spend in the clinic, and I always tell patients to do the exercises at home,” Wofford said.  “I can tell when they’re following through.” 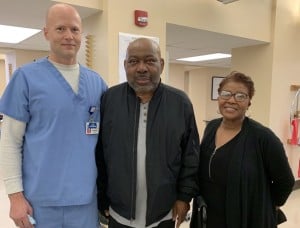 “This man right here, he poured his heart into me to help me get better. For that, I’m grateful,” Walter said of Wofford.

With Walter, it wasn’t a question of if, but how much.

“He’s a very good teacher, and I listened to what he said so I could do it on my own,” Walter said. “Whatever he brought up, I was more than willing to do it. If he said do three sets of 10, I’d do five sets of 10. If he said walk to the door, I’d walk to the wall. I worked at therapy and then went home and worked just as hard.”

He kept thinking about that saying: “You’ve got to give God something to work with.”

And he gave plenty.

These days, Walter is getting around well enough that he’s able to walk over to visit his cousin, who lives nearby in Hernando, Mississippi. He is a member of Brown Missionary Baptist Church in Southaven, where he is inspired by Pastor Bartholomew Orr. He’ll start occupational therapy soon and continues to use what he learned from Wofford to continue his recovery.

“This man right here, he poured his heart into me to help me get better. For that, I’m grateful,” Walter said of Wofford.

“It’s been a long journey,” Sally added, “but a good journey.”