Focused Ultrasound, a procedure offered at Regional One Health’s East Campus Imaging Center, can provide immediate and lasting relief for Essential Tremor and Tremor-Dominant Parkinson’s Disease with no incision and no hospital stay.

For Jerry Mitchell, whose hand tremor made it difficult to shave, eat and write, Focused Ultrasound provided new hope for a condition he thought he’d just have to live with.

Now, Jerry is tremor-free and enjoying the things he loves, like spending time with family and working in the great outdoors as a heavy equipment operator.

Jerry Mitchell has been a heavy equipment operator since he was fresh out of high school, starting in road construction and moving into farming and land clearing. At 74 and a retiree for 12 years, he still puts in 40 to 50 hours a week at the wheel of a tractor or mower or bulldozer.

“It just gets in your blood,” Jerry says. “And I can’t sit around the house – I’ve got to be doing something. I’ve worked all my life and I enjoy it.”

But in recent years, there were times when Jerry wondered how long he could keep at it.

Even before his retirement from a Mississippi paper mill at age 62, Jerry noted shaking in his hands that became harder and harder to control. “I was a crew leader, and every evening I had to write in a logbook what we did that day. I gradually started to notice my hands shaking, and by the time I retired it got to the point where I could hardly fill out those reports,” he said.

Over the next decade, the shaking worsened, and Jerry started having a hard time with day-to-day activities. “My biggest thing was shaving. I’d got to where I was nicking myself pretty bad,” he said. “I was having trouble eating; dropping food.” 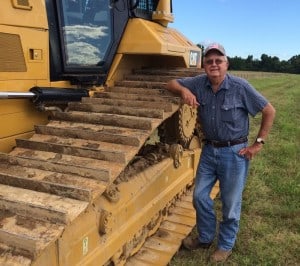 Jerry Mitchell has worked as a heavy equipment operator since he was just out of high school. After Focused Ultrasound relieved his hand tremor, he looks forward to many more years behind the wheel:  “I’m going to work as long as I can. I just enjoy work and I enjoy life, I really do. God has blessed me.”

Jerry thought it something he just had to live with until his wife saw an article on social media about a new procedure at Regional One Health that addresses the exact symptoms Jerry was experiencing. Soon enough, they were on their way to see neurosurgeon Aaron Bond, MD about a procedure called Focused Ultrasound.

Doctors had previously told Jerry his symptoms were the early signs of Parkinson’s disease, but Dr. Bond had a different idea: “We were sitting in there and he was talking to me, and then he got up and walked outside the door,” Jerry recalls. “He said, ‘Mr. Jerry, come with me, I want to show you something.’ So I jumped up and followed him, and he said, ‘That’s good.’”

Dr. Bond could tell from how quickly Jerry got up that his strength and agility were just fine – meaning Parkinson’s was unlikely. Instead, he told the family about a condition called Essential Tremor that causes one or both hands to shake. Then, he told them what he could do about it.

Focused Ultrasound, which involves no incisions or hospital stay, uses ultrasound waves guided by MRI to treat a small spot in the brain that is responsible for tremor, Dr. Bond said. He performs the procedure at Regional One Health’s East Campus Imaging Center.

During treatment, patients have their head shaved and are fitted with a helmet-like device that keeps their head still. Cool water circulates through the helmet to help ultrasound waves pass easily through the skull. Then, the upper half of their body moves in and out of an MRI as Dr. Bond locates and treats the spot in the brain that is causing the tremor.

“You can feel something happening, but it doesn’t hurt,” Jerry said. “There’s no pain whatsoever while he’s doing that.”

And for many patients, the results are immediate. Before the procedure, Dr. Bond asked Jerry to draw a spiral – a nearly impossible task with his shaking hand. Then, “Every so often he’d bring me out, and he’d have me draw a circle. By the third time, it was just perfect,” Jerry said. 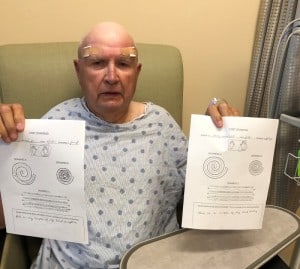 Patients are asked to draw a spiral and write a sentence before and after their Focused Ultrasound procedure. For Jerry and many others, the difference is night and day.

A few hours later, Jerry was on his way home, his right hand steady. In the months that followed, he could eat, work, write, shave – you name it – with no problem.

Now, he’s become a Focused Ultrasound ambassador as word gets around his hometown about the miracle procedure he had at Regional One Health.

“My wife and I went to a restaurant one Friday night. We were up front paying when we saw another couple come in, and he said to me, ‘You’re just the one I wanted to see.’”

“It’s what you had done to you,” the man replied.

As Jerry looked closer, he could see the man’s hands shaking. “When it was me, I didn’t have a clue there was anything out there that could help, so I feel obligated to tell people about it. If you can help someone else, you should,” he said.

Jerry says that’s exactly what Dr. Bond and Regional One Health did for him. “It’s a wonderful thing they’ve come up with,” he said. “When you’re shaking, you have trouble doing all those little things you need to do, and this makes everything so much better. Now, even though I keep telling everyone I’m going to retire when I turn 75, my wife says, ‘You’ll never do it.’”

She’s probably right, and that’s just fine by Jerry. “God has blessed me,” he says. “I’m going to work as long as I can. I just enjoy work and I enjoy life, I really do.”

Dr. Bond performs Focused Ultrasound at our East Campus Imaging Center, 6555 Quince Road. Visit https://www.regionalonehealth.org/east-campus-imaging-services/essential-tremors/ to find out if Focused Ultrasound is right for you.