As women age, they need to pay attention to breast health due to a rising risk of cancer.

Dr. Pallavi Khanna counsels patients to manage their risk factors and be vigilant about their recommended screening mammograms.

She said women should start by finding a doctor who is comfortable talking with them openly about breast health.

Breast health is one of the most important topics Pallavi Khanna, MD, OB/GYN, NCMP talks about with patients in her Menopause Care Practice at Regional One Health.

“This is such an important part of caring for women at this age. You can’t ignore it,” Dr. Khanna said. “Your provider should make sure you’re being properly screened to support breast health.”

Dr. Khanna and Diane Pace Ph.D., APRN, FNP-BC, NCMP, FAAN are certified menopause practitioners who see patients at Regional One Health’s East Campus. They help women address menopause symptoms, and also lead the Transitioning Through Menopause support group on the first Thursday of each month from noon-1:15 at the East Campus.

Dr. Khanna recently talked to the group about breast cancer risk and early detection. “We want to make sure we catch this disease early,” she said. “The most lives are saved when women screen every year starting at age 40. A mammogram can find tumors that are too small to feel, and those tumors are easier to treat with a better chance of survival.”

She said statistics show just how important that is:

One in eight women will get breast cancer during her life. One in six of those diagnoses will be in women ages 40-49, and three-fourths of the women diagnosed are considered “average risk.” 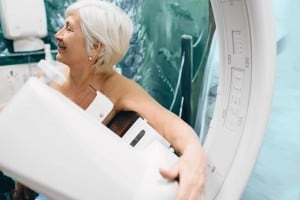 Most women should have an annual screening mammogram starting at age 40. The test is the best way to catch cancer early.

Fortunately, the American College of Obstetricians and Gynecologists’ recommendation for a screening mammogram every year starting at age 40 has led to a 40 percent reduction in deaths.

Dr. Khanna said several of the top risk factors for breast cancer mean women in her menopause practice need to be especially vigilant. One of those is simply being female – 99 percent of breast cancer diagnoses are in women – and another is aging. The average age for starting menopause is 51, so women in menopause fall into a higher risk category than younger women.

That’s the same reason another menopause issue – the use of hormone therapy with estrogen and progestin – can be a breast cancer risk factor. 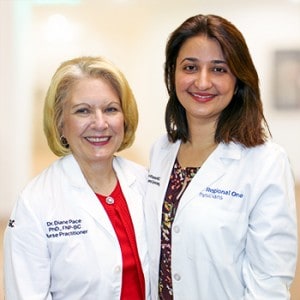 Diane Todd Pace and Dr. Pallavi Khanna are Certified Menopause Practitioners at Regional One Health. They can counsel women on breast health and other issues.

Hormone therapy is used during menopause to address symptoms like hot flashes and vaginal dryness. It extends hormone cycles into menopause, when they would otherwise naturally stop.

Dr. Khanna said women should talk with their physician about the risks and rewards of hormone therapy. She counsels her patients that their increased risk from the therapy can be offset by addressing other risk factors, such as alcohol and nicotine use or a sedentary lifestyle.

“There are other risk factors that you can reduce,” Dr. Khanna explained, so if hormone therapy is improving your quality of life, “Maybe you can trade one for the other.”

Dr. Khanna said the most important step a woman can take is to talk to her doctor. She said some primary care physicians aren’t comfortable with the topic of breast health, so she encourages menopausal women to find a physician who will give them clear answers.

She noted, “Your insurance likely covers both an annual physical and annual gynecological exam, so take advantage of both and make sure you’re being screened by a doctor who understands breast health. It’s important that someone talks with you about this.”