Focused Ultrasound is a new procedure available at our East Campus that treats hand tremor with no incision and no hospital stay.

MR-Guided Focused Ultrasound might sound like magic: Patients lie on a treatment table as sound waves are sent deep into their brain; hours later, they leave with relief from hand tremors that kept them from doing the things they love.

Aaron Bond, MD, the neurosurgeon providing the incisionless outpatient procedure at Regional One Health’s East Campus Imaging Center for patients with a confirmed diagnosis of essential tremor or tremor-dominant Parkinson’s disease, explained the science behind that magic.

“While ultrasound is familiar as a diagnosis tool, many people are not aware that it can be used as a treatment,” Dr. Bond said. “Ultrasound waves, under MRI guidance, can pass safely through the skull to target a small spot in the brain considered to be responsible for tremor.”

That spot, the VIM nucleus in the thalamus, is in the center of the brain. Dr. Bond explained how the focused ultrasound treatment, which is only available in a handful of locations throughout the United States, lets him treat the VIM nucleus without an incision or permanent implant.

Before the procedure, patients need to have their head shaved. They are then fitted with a helmet-like device that will have cool water circulating in its upper half. Dr. Bond said these steps allow ultrasound waves to pass easily through the skull.

Aaron Bond, MD, noted, “Ultrasound waves, under MRI guidance, can pass safely through the skull to target a small spot in the brain considered to be responsible for tremor.”

During the procedure, patients lie still on a treatment table. They are conscious and alert.

The upper half of their body moves in and out of an MRI machine as Dr. Bond uses the highly accurate MR imaging to guide the ultrasound waves to the thalamus. When he locates the correct spot, he creates a small burn, which has a therapeutic effect by disrupting the cause of the tremor.

Many patients see improvement while still lying on the treatment bed. Throughout the procedure, Dr. Bond asks patients to perform simple tasks like touching their finger to their nose or drawing a spiral on a notepad. As the treatment progresses, they become increasingly steady.

Directly after the procedure, most patients report significant relief. They can typically resume normal activities in a few days and do things they previously couldn’t do because of their tremor.

Dr. Bond described his experience with a patient he recently treated at Regional One Health.

“She couldn’t feed herself. She couldn’t write. She couldn’t do any of the basic activities of daily living,” he said. “By the end of the case, her tremor had completely stopped. I saw her in the office three days later, and she told me she’s eating her peas with her fork.”

A clinical trial showed the improvements – in both tremor and overall quality of life – continue long after the focused ultrasound treatment.

The study tracked patients with moderate-to-severe essential tremor who did not get relief from medication. These patients were randomly assigned to a group that received focused ultrasound treatment and a placebo group that received no treatment (this group would have the opportunity three months later to undergo the procedure).

Study leaders evaluated the patients before and after treatment using two tools: 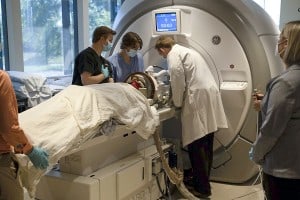 Most patients go home the same day of their focused ultrasound treatment and experience immediate, lasting relief. The procedure is low-risk, and side effects are typically minimal.

Assessments were videotaped and rated by an independent group of neurologists who did not know if the patient was part of the treatment group or placebo group.

Quality of life scores also improved significantly in the treatment group, and after three years, patients continued to show an average of 76.5 percent improvement in tremor severity.

While there is a possibility for tremor to return – and focused ultrasound is not designed to treat the underlying condition causing the tremor – Dr. Bond said the treatment can be lifechanging. “Patients don’t realize there are treatments that can potentially eliminate their tremors,” he said. “We want to make sure patients get the care to go back to living comfortably.”

Visit www.regionalonehealth.org/east-campus-imaging-services/essential-tremors/ to request a consultation and learn more about our focused ultrasound service.