Football players Avery Gennesy and Tre’ Williams are getting ready to pursue their dreams in the XFL next year.

Both had to overcome injuries and rebuild their strength in order to have that chance.

They credit Regional One Health’s Post Rehab Wellness Program, which combines therapy and certified personal training, with helping them get back on the field.

When the Houston Roughnecks and Los Angeles Wildcats open the 2020 XFL season, the staff at Regional One Health’s Center for Rehabilitative Medicine will be watching.

For several months, XFL players Avery Gennesy and Tre’ Williams have worked out together in the center’s Post-Rehab Wellness Program, pushing each other while also becoming friends.

But when they take the field February 8, they’ll be opponents, Gennesy with the Roughnecks and Williams with the Wildcats.

“They’ve both faced trials, so to still have an opportunity to play the game they love is a great thing,” said Kenneth Robinson, Post-Rehab Wellness Program coordinator. “It’s been a journey.”

Robinson has played a big part in that journey.

The Post-Rehab Wellness Program combines his knowledge as a certified personal trainer with the rehab expertise of the center’s physical therapists.

After patients finish physical/occupational therapy following an illness or injury, Robinson creates an exercise program based on their abilities and limitations to build strength, flexibility, stamina, etc. He teaches them how to perform the exercises safely, after which they have access to the center’s gym. They also maintain access to their physical therapist if any problems arise.

For patients of all ages, it’s a path to resume normal activity. For athletes like Gennesy and Williams, it offers both rehabilitation and a competitive edge – and another chance at a dream.

As a kid, Gennesy didn’t expect to end up on the football field, at least not in helmet and pads. “I actually wanted to be a band member – I played percussion. As for sports, basketball was my first love,” he said. “But sometimes you come to the realization you’re better at something else.”

Post-Rehab Wellness Coordinator Kenneth Robinson, Avery Gennesy, Tre’ Williams and Outpatient Rehabilitation Manager Ambrosia Scott teamed up to help Gennesy and Williams get back on the football field after injuries.

In high school Gennesy played offensive tackle and guard in Southaven, moving onto collegiate play at East Mississippi Community College and Texas A&M University. After three years, he made it to the NFL before an injury to his SI joint – the joint that links the pelvis and spine – kept him off the field.

Williams also started football at a young age but took a few years to get passionate about it: “My mom signed me up at the age of 4 to keep me busy, but I didn’t start liking it until I was 7,” he said.

He excelled on his high school team in Mobile, Alabama, signing at Auburn University as a five-star middle linebacker recruit and going on to earn Second Team All-SEC honors his final year. But the success hid a painful reality: “I had a neck injury that I’d played with. We thought it was stingers, but it turned out to be a herniated disc.”

He ended up failing NFL physicals with two teams. “That’s when I decided to have surgery,” he said. “I had a fusion, so I have a titanium plate in my neck.”

Both men looked to the Post-Rehab Wellness Program to get stronger after recovering from their injuries. They say Robinson helped with both the physical and mental aspects of that challenge.
With Gennesy, Robinson focused on building stamina and determination. “We worked on what it takes to play at the next level, and we really developed a father-son type bond,” Robinson said.

For Williams, the focus was on rebuilding physical strength and a football-ready mindset. Now, “His hunger for the game has come back,” Robinson said. 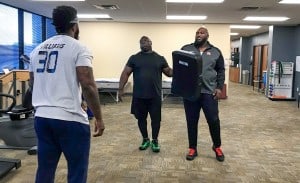 Williams and Gennesy say Robinson was both trainer and mentor, helping them rebuild strength and agility and also counseling them about their football futures.

Gennesy and Williams say they feel strong and pain-free, but what they’re most grateful for is how Regional One Health got them past a moment when they could have quit. Instead, both are excited for their XFL debut and eyeing a future that includes playing and coaching.

“I got my confidence back. I hadn’t played in two years, so I needed to redefine my game and redefine myself. They helped me find myself again,” Williams said. “Now, I have an opportunity to show what I’m capable of again and eventually get the sport of football out of my system. I’ve got a lot to prove, not only to myself but to my coaches.”

Gennesy hopes to return to the NFL one day, and said he’ll continue working with Robinson to get there. “He helped me get my endurance up, but more than that, he’s become like another father figure to me. I can talk to him about life,” he said. “He helped me realize that you never know when it’s your last snap, and that I want to play the game as long as I can.”

As for Robinson, he’ll be watching closely as the Roughnecks and Wildcats face off – but what he’s rooting for is a little different than the average fan. “I want them to be safe, and I want them to perform their best. They had to have a lot of desire to get where they are, and they never gave up,” he said. “I’m glad to see this opportunity is still there for them.”

To make an appointment with the Post-Rehab Wellness Program at our East Campus, call 901-515-3100.