Thomas Trotta was driving from California to New York when a stroke and car accident dramatically changed his plans.

He ended up at Regional One Health’s nationally-renowned Subacute Care unit.

The medical treatment he received got him back on his feet, but it is the kindness he was shown that made the biggest impression.

When Thomas Trotta set out from San Diego this September, his plan was to make the cross-country drive to New York to visit his brother. While a stroke and serious car accident kept him from reaching his geographical destination, he says he still ended up in the embrace of family.

Trotta spent seven weeks at Regional One Health, half of it in the award-winning Subacute Care unit, where he met a team including Administrator Nicole Lowe, Director of Nursing Theresa Traylor and social worker Carol Dennis. Before he knew it, his family had expanded.

“These girls are fantastic,” Trotta said. “I’m so glad they brought me here, because they made me feel like family. They took such great care of me that I don’t want to go back to California!”

Trotta, 65, a Vietnam-era veteran, grew up in New York but moved to San Diego after inheriting a cottage from his uncle. He stayed close with loved ones in New York, and this fall he threw his luggage in the backseat of his car and hit the road for a visit.

He was on I-40 near Brownsville when disaster struck. He suffered a serious stroke, and his vehicle was hit by an 18-wheeler, causing traumatic injuries. “I’m lucky to be alive. When I see the photos of my car…” he trails off, shaking his head. 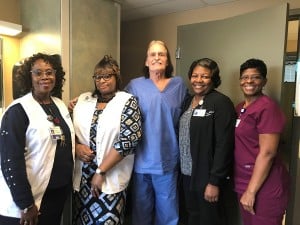 Thomas Trotta, center, says the Subacute Care team treated him like family as he recovered from his stroke and accident. “These girls are fantastic – I’m so glad they brought me here.”

Trotta doesn’t remember much about the crash or the days directly afterwards, but he has a clear recollection of being transferred to Subacute Care.

He wasn’t yet able to walk, and faced a long road to recovery that would include physical, speech and occupational therapy.

“We worked with him on strength, gait, range of motion, cognition and more,” said Lowe, whose unit cares for clinically complex patients who are stable enough to leave acute care but still need highly-skilled nursing treatment and therapy.

“He made a miracle turnaround. Now, he’s walking and doing everything he was able to do before.”

While the expert medical care Trotta received is remarkable, it is the kindness that made the biggest impression. He said Dennis especially was a source of support for which he’ll always be grateful: “She went out of her way for me. She took care of everything,” he said. “It’s not ‘I’ll be back in 10 minutes’ and then you never see her again. She’s on the money.”

“Carol has done amazing work with him,” Lowe said. “He never expected to be in Memphis for almost two months, and he doesn’t have family here to help, so she spent countless hours making sure he could go back home safely.” 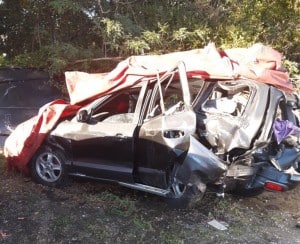 Trotta’s car was hauled to a salvage yard after his accident. Carol Dennis, his social work, arranged a trip to the yard to retrieve his luggage and personal belongings.

“She made him feel very much at home, even though he was actually far from his loved ones and here for a traumatic reason,” Traylor said. “She thought of everything.”

Dennis even planned a trip to Brownsville with Lowe and Traylor so they could go to the salvage yard and try to get Trotta’s clothes and personal belongings out of his wrecked car.

The mission was a success – and also reinforced how amazing Trotta’s recovery is.

“His luggage may actually have saved him,” Traylor said. “He had it in the backseat, so it took a lot of the impact. The guy at the salvage yard had to help us pry it out because it was jammed in so tight.”

That isn’t the only time Dennis went above and beyond.

She brought Trotta a cane to help him walk, giving him a huge morale boost. She helped him get his phone re-connected so he could pay bills and wouldn’t go home to no water and electricity.

She even booked his flight home, staying on the phone for what seemed like hours as curt airline employees repeatedly put her on hold. “I would have said a few words, but Carol was so nice and just kept her patience,” Trotta marvels. 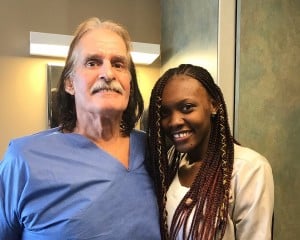 Trotta said the Subacute Care staff, such as Patient Care Assistant La’Melanie Pickett, were attentive and compassionate. “I know I’m lucky to be alive, and that these ladies helped me get there,” he said.

For Dennis, it’s second nature: “Whatever I do, it comes from the heart. I try to put myself in the patient’s shoes and think, what would I need? What would help me?” she said.

It worked wonders for Trotta, and Lowe and Traylor say it’s an example of the care their team provides every day – efforts that recently earned them accolades from US News & World Report as one of the nation’s Best Nursing Homes for the second year in a row.

Lowe said the recognition reflects the fact that outcomes like Trotta’s are not uncommon in Subacute Care.

“We see patients come to us in one condition, and then leave us in another where they are able to once again function on their own – it’s amazing,” she said.

Traylor added, “If you look at it like a relay race, we’re the last leg, and we get them to the finish line. It’s very rewarding to know we’re able to get them back.”

As for Trotta, they indeed got him back – back on his feet, back home to California, and back to a family that has grown a little bit larger. “I know I’m lucky to be alive, and that these ladies here helped me get there,” he said. “I’ll miss this place, and I’ll definitely come back to visit them!”