For babies in the NICU, needles, tubes and monitors are a fact of life.

It’s all done to help them grow and thrive, but for a newborn, it’s still negative stimulation that can lead to agitation and discomfort. At Regional One Health, doctors and therapists are looking at a way to bring a more comforting, calming touch into the lives of their tiny patients. 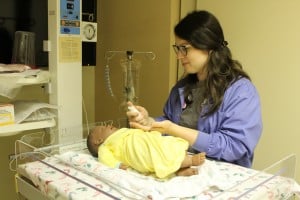 Neonatologists Divya Rana, MD and Massroor Pourcyrous, MD are the lead physicians on an ongoing study on how infant massage can help relax babies suffering from Neonatal Abstinence Syndrome, which occurs when a baby must withdraw from opioids they were exposed to while in the womb.

So far, they’ve studied over 30 babies, and the results are encouraging.

Dr. Rana noted NAS babies stay in Regional One Health’s NICU for a minimum of five days for monitoring; longer if they experience problems.

“We have them here for the first few days of life, so we wanted to start the therapy then,” she said. “We found there was a significant decrease in heart rate, blood pressure and respiratory rate at the end of the sessions. Babies can’t say, ‘Hey, I feel good!’ so these are the measurements through which they show they’re relaxed.”

Occupational therapist Emily Bunn, MOTR/L, NTMTC provides infant massage at Regional One Health, and said it helps counteract the negative touches that are part of life in the NICU.

“There are needles and tubes; even a diaper change can be negative because they aren’t actually ready to be having diaper changes yet,” Bunn said. “Massage provides a counterbalancing touch that is positive.” 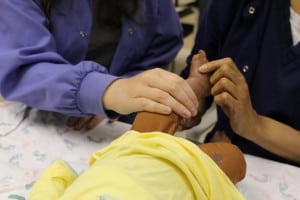 Gentle massage serves as a positive touch to counteract needles, tubes and other negative stimulation that is part of life for babies in the NICU.

Occupational therapist Kalyani Garde, MOTR/L, CIMI, who brought the idea of the study to Dr. Rana’s attention, noted, “A NICU is a highly medically adverse environment, and that’s stressful for the babies. Their brains are still developing, and creating positive neuropathways through massage can be very important to their emotional health.”

Dr. Rana and Dr. Pourcyrous felt there was a good chance the soothing, calming nature of massage could also help with the babies’ physical symptoms, like excessive crying and poor sleep as well as the physiological markers of increased heart and respiratory rate, vomiting and diarrhea and feeding problems.

Still, they knew they needed to proceed carefully to study NAS babies.

“Typically, these babies are kept in a separate environment where it’s dark and quiet, because stimulation is considered distressing to them,” Dr. Rana explained. “We needed to come up with sound scientific guidelines and make sure the moms agreed with what we wanted to do.”

On the latter, they almost immediately got a good response as parents embraced a new way to comfort their babies.

As for study guidelines, they developed a protocol to measure the babies’ heart rates, respiratory rates and blood pressure before and after massage, and determined it would be best to offer massage one to three times a week based on each infant’s tolerance.

Then, they embarked on the study, being sure to follow the babies’ signals and adjust or stop the massage accordingly. For some babies, the massage therapy would last just a minute or so; for others, it would only be done on an arm or a leg. 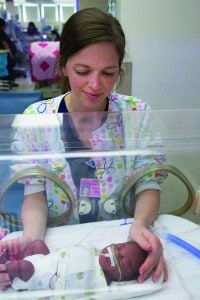 NICU babies spend a lot of time lying still, so physical and occupational therapy are important to help them thrive.

Along with recording improved measurements in heart rate, respiratory rate and oxygen levels, Dr. Rana and Dr. Pourcyrous observed the babies and found they appeared more comfortable following massage therapy. Soon, they plan to study the babies’ brainwaves to gauge if massage impacts their sleep cycles.

With the promising results, which they plan to publish, Dr. Rana and Dr. Pourcyrous are crafting guidelines to make infant massage a routine part of the care provided to NAS infants at Regional One Health.

They’re also educating moms to perform the techniques themselves.

Dr. Rana noted occupational and physical therapy play a crucial role in the NICU, where babies may lie in the same position for a long time and rely on therapists to stretch their muscles.

Routine PT and OT sessions have shown to help with weight gain and thriving.

“Therapy actually plays a very large role in how we treat babies in the NICU, and it can be an important part of their care even after they leave the hospital,” she said.

To support the lifesaving care provided at Regional One Health, visit www.regionalonehealth.org/foundation.