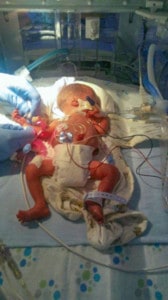 Jax came to Regional One Health with heart failure and accumulating fluid in different parts of his body after a specialist in Cassi Day’s hometown recommended our services.

Millimeters. Dr. Mauro Schenone and his team in Maternal Fetal Medicine Services at Regional One Health faced a task that required threading a needle into the blood vessel of an umbilical cord of an unborn fetus, a blood vessel that measured just a couple of millimeters in diameter.

“Jax came to us with a dismal prognosis,” Dr. Schenone said. “He was in heart failure and accumulating fluid in different parts of his body. You typically see this when a baby is about to go into serious trouble. If nothing was done the baby was likely to die.”

Dr. Schenone’s team noticed the baby had a condition that affected the blood count and they needed to perform a procedure that involved blood transfusion inside the womb. They couldn’t wait for the baby to be born to give him blood.

So Dr. Schenone threaded a thin needle through the mother’s belly and uterus, guiding it with ultrasound into one of the umbilical cord vessels. Once in, they tested the blood and proceeded to transfuse the blood into the baby.

“This is not an easy task,” Dr. Schenone said with understatement.

This was Cassi Day’s third pregnancy, and much like the first two, she hadn’t experienced anything unusual. But at 25 weeks, a scan revealed her baby was anemic and needed a blood transfusion. A specialist in her hometown of Jonesboro, Arkansas, sent Cassi to Regional One Health.

At 25 weeks, it was time to buy things for the baby’s nursery. Instead, her baby’s condition was so serious no one believed a successful birth was in the cards. Cassi and her husband, Justin, traveled from Jonesboro to Regional One Health several times a week to check her baby’s anemia levels. A few weeks after the transfusion, Cassi asked Dr. Schenone to give her the hard truth. Her baby was affected by hydrops (heart failure and fluid retention) and had a relatively small chance of survival if born, he said. However, he personally felt with the care she was currently receiving that her chances were greater.

Fortunately, the procedure performed by Dr. Schenone was a success.  Shortly after the transfusion, the team noticed significant improvement, including less fluid accumulation. The success of the procedure allowed the team to buy a few weeks of maturation inside the womb for Jax, increasing his chances of survival when born.

“It was days sitting in the hospital knowing you’ll probably lose your baby,” Cassi said. “There was a big chance he’d be delivered and wouldn’t make it with the problems he had. When people brought us baby gifts, I cried and told them to take it back.”

They came three to four weeks later for another procedure. Cassi was 29 weeks and one day along in her pregnancy. But during this procedure, the baby’s heart rate dropped too much, forcing an emergency C-section. Jax Hagan Robertson was born on July 30, 2017, weighing 2 pounds, 3 ounces and measuring 14 inches long. 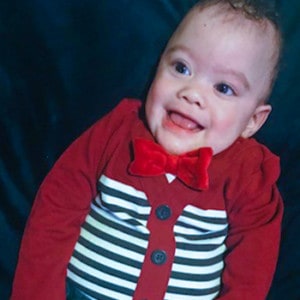 “I felt like I was a part of Dr. Schenone’s family the way he took care of me,” Cassi said. “I think Jax’s our miracle baby.”

The road ahead wasn’t easy. Justin had recently started a new job, and Cassi was a student working a part-time job and maintaining an internship. Jax eventually went home Oct. 16 after more than two-and-a-half month stay at Regional One Health’s Sheldon B. Korones Newborn Center.

“I felt like I was part of Dr. Schenone’s family the way he took care of me,” Cassi said. “He went down to the NICU and checked on my son. He didn’t have to do that. It meant so much to me. I felt at that point he cared beyond me being his patient.”

Jax went home on oxygen and a sleep apnea machine. He’s likely to develop asthma and possibly faces other challenges. The emotional rollercoaster hasn’t quite come to a complete stop, but Cassi said her family sees light at the end of that tunnel, especially considering she has a baby boy at home who only had a slim chance of survival.

“I’m still dealing with some of the shock and surprise,” Cassi said. “Getting released from the hospital, I’m a little nervous that it’s just us. I don’t know if that will ever go away. I think he’s our miracle baby.”