When a team of four providers from Regional One Health visited China last month, it was a trip that ultimately could have an impact on some 110 million people. That’s how many people live in a region of China where doctors from 36 hospitals attended safety training led by a high-risk obstetrics care team from Regional One Health. 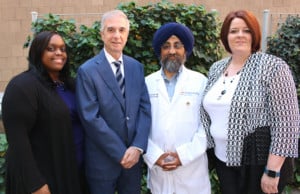 Led by Medical Director Giancarlo Mari, MD, the Regional One Health team visited China to share the OB F.A.S.T. (Feasible Approach to Safety Training) program, developed at Regional One Health to impact the infant mortality rate. The training includes simulations of emergency situations that could occur in labor and delivery with the intent of making sure all providers are ready for whatever situation might arise. Doctors and nurses now have the opportunity to train on rare and difficult procedures in a lab setting so that if it ever happens in real life they will be ready.

The Regional One Health team traveled to Beijing, Xian and Zhenzhous, focusing their instruction time at Zhenzhous University. 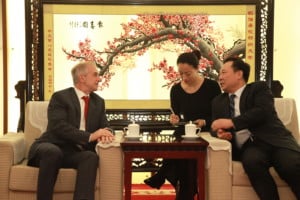 The visit to China was the first international training trip for the team from Regional One Health, but they’ve been around the block with the material. It’s based on medical simulations Regional One Health’s High-Risk Obstetrics team began conducting about five years ago. The team traveled to England to train and quickly realized it could create its own program, which today is called OB F.A.S.T.

“The main goal is to become skilled with some of these procedures and situations, which could be very dangerous for patients,” Dr. Mari said.

Through the years, countless doctors, nurses and residents have been trained at Regional One Health. The team also has trained about 150 doctors from 20 U.S. states at an annual meeting in Destin, Florida.

But while American doctors and nurses have received the benefits of the training, the conversation began pointing toward taking the program to other countries. Two Chinese doctors trained at Regional One Health last year, one of whom invited the Memphis team to take the OB F.A.S.T. program to her hospital in China.

The training was centered on the OB F.A.S.T. manual, which was translated into Chinese. The manual includes everything the department has discussed and learned through the years. At the core of what is simulated in Memphis as well as what the team taught its Chinese counterparts is the importance of teamwork.

Everyone working in labor and delivery has a task, typically something they’re individually focused on in the heat of the moment. But working as a team teaches participants to look at the bigger picture.

“We’re so focused on what’s going on with my patient that you can miss the smallest thing or the bigger picture of the situation,” Miller said. “Stand back and observe. Declare an emergency early if necessary.”

Regional One Health’s High Risk Obstetrics team members go through this training annually. The training occurs in the real rooms where deliveries occur so staff can understand how to react to an emergency in the room where it will happen.

“You want to be comfortable in the room where an emergency will be,” Miller said. “They notice how things are and should be in the room so we can then make recommendations if something needs to be altered.”

The Regional One Health team with doctors from 36 hospitals who attended simulations at Zhenzhous University.

“They had so many questions,” Miller said. “I didn’t even want to take breaks. They were waiting on me when I’d come back. These were physicians waiting in line wanting to ask us questions. To see them understand something was amazing.”

But if it’s anything like Shelby County, Dr. Mari said the results will be obvious.