After Gia Broadway suffered life-threatening injuries from head to toe in a car accident, doctors told her she might never walk or work again. For a dancer, teacher, wife and mother, it was devastating news.

But Gia wasn’t about to give up – and her fighting spirit was matched by her world-class medical team at Regional One Health.

After six weeks in the hospital and extensive rehabilitation therapy, Gia is back to the things she loves, and has every intention of continuing to pursue her dreams.

To perform a pirouette, a dancer must rise to pointe on one foot and complete a full spin, fixing their gaze to a single spot in order to keep their balance. No matter how flawless the execution, there is a split-second of blindness that must be overcome through control, focus and strength.

During her life as a dancer, Gia Broadway could pirouette as if by second nature.

While a car accident might have taken that from her, don’t for a second think it took her control, focus and strength. Instead, those have only become more formidable, and they are paired with a powerful gratitude that has Gia’s gaze firmly fixed on the things in life that matter most.

“I’m grateful for my team at Regional One Health – they put me back together again. When somebody pours that much into you, you owe them your best in return, because they gave you their best,” she said. “I am more determined than ever to do the things I want to do.”

May 26, 2020 marked the start of summer vacation after a school year like no other.

Gia’s job as a music teacher at St. George’s Independent School and her two younger sons’ high school and middle school classes had been upended by COVID-19, and she and husband Danny, an artist and teacher, were looking forward to a well-earned break.

It was a Tuesday, and Gia and son Noah were driving home from a doctor appointment in Nashville, where he received his follow-up care for a kidney transplant done just one year prior – remarkably, his donor was none other than Gia herself. 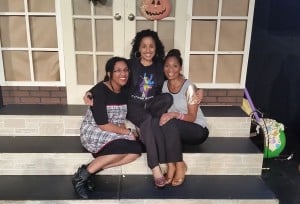 A dancer, teacher, wife, mother, distance runner and so much more, Gia Broadway has always embraced life to its fullest. When an accident threated her life and ability to work and walk, there was no way Gia was giving up.

Gia recalls nothing about the car that ran them off the road as they neared Memphis.

“I remember taking Noah to Chick-fil-A, and then, in my mind, I was kidnapped,” she said. “I thought my legs were in cages, I wasn’t allowed to get up, and everyone was talking in soft voices like they didn’t want anybody to hear.”

At the Elvis Presley Trauma Center, an elite multidisciplinary team had jumped into action to save Gia’s life. She was injured from head to toe: two traumatic brain injuries, a broken neck so severe she was internally decapitated, seven broken ribs, two broken legs, a broken elbow, and a broken heel. Her facial injuries were the most severe LeFort III fracture, with her nose basically cracked off her face and fractures to her eye sockets, cheekbones and jaw.

The following days were a nightmare. With no memory of what happened, Gia lived in a fog of confusion: “There’s a sadness to that feeling I can’t explain; a sadness that I had never felt before and haven’t felt since,” she said.

She was convinced she was trying to run from her kidnapper. Once, she thought she had shown up at the home of one of her nurses. Another time, she believed she and her mother got in an argument at a party on an underwater boat and she had to beg her mother not to leave.

With her jaw wired shut, Gia couldn’t talk, so nurses gave her notebooks to write in. She recalls how she would touch the end of the marker, staining her fingertips with ink, before writing. 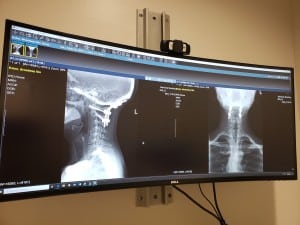 Gia’s injuries were extremely severe: she was considered internally decapitated, suffered two traumatic brain injuries, had the most serious classification of facial fractures, and broke seven ribs, both of her legs, an elbow, and a heel.

The notebooks now serve as a window into her ordeal, with pages filled by jumbled letters giving way to questions and messages that grow increasingly clear. On the day Danny finally helped her understand she had been in a car accident, she wrote, simply, “Is Noah OK?”

“As a mother, you can take anything except knowing your child is hurt. Once I understood he was OK, everything else I could handle,” Gia said.

It was both a crucial turning point and a moment of reckoning. “I finally understood what had happened. It was also the day Danny told me both my legs were broken, and that I couldn’t get up and walk. And that I might never walk again.”

But instead of feeling hopeless, knowing the reality helped Gia focus. Within days, she was out of the Trauma ICU and into the Inpatient Rehabilitation Hospital. As she grew stronger, she also started to learn just how much she had to overcome.

A surgeon told her, “Most people with just one of your injuries will never walk or work again.” A nurse looked at her chart and then at Gia and said, “I’m looking at a miracle.” When Gia saw an X-ray of her face, repaired with screws and metal plates, “I broke down in tears. I was aware I had been saved, yet I wasn’t aware of the depth and breadth of the help these people had given me.”

It only reinforced her will, and as medical expertise healed her body, kindness restored her soul. 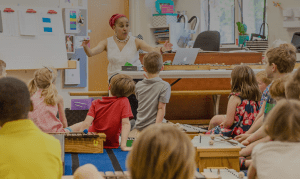 Teaching is one of Gia’s passions. During her hospitalization, she was lifted up by messages from her students – and when she was able to return to the classroom, it marked a huge milestone.

Gia has a long list of providers she is grateful for, and no shortage of stories of humanity. Stories like nurse Vangie Tasipit brushing her teeth when her jaw was wired shut; nurse Rachel Heflin washing blood from her hair, working gently due to Gia’s head and neck injuries; occupational therapist Sheri Roberts teaching her to shower when she couldn’t stand; physical therapist Callie Bauleke insisting, “You’re going to walk again; all you have to do is work.”

To this day, Callie’s motto stays in Gia’s mind: “Can’t teach ‘want to.’” It is a constant reminder that it’s Gia herself and her own desire to heal that drives her recovery.

“I was incapacitated like never before, and here came these people who helped me feel like a human being,” Gia said. “These are people who make the sun come up with their personality.”

Eventually, she started feeling not just human, but more like herself.

“When I started messing with them about bringing me a Snickers bar and some BBQ, they said, ‘Let’s get her out of here!’” Gia laughed.

Six weeks after the crash, she left the hospital. For her birthday that year, she enjoyed her mom’s homemade lasagna and a gorgeous chocolate cake. She started walking on her own.

And in March 2021, she returned to her students, who had lifted her spirits with cards and notes, videos and song compositions. Every day she brings them the gift of music: “I can’t sing anymore because of a paralyzed vocal cord, but I think we make it work,” Gia smiles. 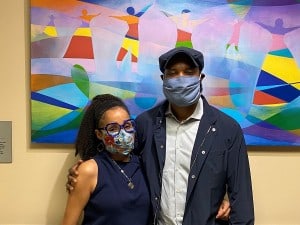 Memphis-based artist Danny Broadway created an installation titled “Healing Motion” in honor of his wife’s care. The colorful, vibrant paintings bring hope and inspiration to patients, families and employees at Regional One Health.

Gia continues doing physical therapy and faces additional surgeries. But by and large, the focus of her life is not her accident, but the things that have always mattered most: time with family, seeing Noah follow in her footsteps by auditioning for college dance programs, teaching, getting back into distance running with her eye on someday completing a marathon.

Recently, she and Danny were back at Regional One Health to dedicate an art installation he created in honor of Gia’s care. “Healing Motion” brightens the hallway outside the Critical Care Waiting Room, harnessing the power of art to help patients heal and inspire health care workers.

For Gia, it’s another step in a journey she approaches with positivity and grace.

Perhaps that is because in a sense, Gia has already performed her greatest pirouette; the one that brought her back to life thanks to exceptional medical care, determination and faith.

“I never even had time to ask God to save me or my child, and yet Noah was injured less than I was, and I was given the mercy of having a team like the one I had at Regional One Health,” she said. “For him to do this for me without me asking, I know that I am a well-loved child of God, and I will always embrace that as I keep moving forward.”

Visit regionalonehealthfoundation.org to support our team as they are Specializing in Tomorrows for patients like Gia.