All Foundation News | All System News
2021-10-05T11:13:10-06:00February 22nd, 2021|
PreviousNext
The heart of a lion: Samir Alniswan is conquering devastating injuries with courage and expert care at the Firefighters Burn Center

On the day he is discharged from the hospital, Samir Alniswan wears a black shirt emblazoned with the face of lion.

It’s an image that conjures up many meanings: Power. Strength. Courage.

After Samir Alniswan was burned over 60 percent of his body, Firefighters Burn Center specialists like Ram Velamuri, MD saved his legs and his life.

After Samir suffered devastating burns last July, he needed all of those to survive and recover – and he also needed the medical expertise, state-of-the-art technology and heartfelt compassion that makes Regional One Health’s Firefighters Burn Center unique in the Mid-South.

“If I had gone to any other hospital, I don’t think I would have made it. They’ve got amazing doctors,” Samir said. “I tell people, this is the hospital to go to: don’t give up, because they’ll save you. They did surgery after surgery to save my leg, and went above and beyond even what they’re supposed to do.”

Burn specialist Ram Velamuri, MD and Firefighters Burn Center Medical Director William Hickerson, MD were among the first to treat Samir, who had injuries to his chest, abdomen, face, arms and legs and was also suffering from smoke inhalation.

“He had extremely deep burns to 60 percent of his body,” Dr. Velamuri said. “The burns to his legs, especially the left leg, extended all the way to the bone.”

The soft tissue and ligament structure of Samir’s legs was destroyed, leading to significant loss of mobility in his foot and ankle. On his upper extremities, four fingers on his right hand had to be amputated, and the depth of the burns caused limited movement and instability in his wrists.

Over the next six months, Samir would endure over 40 surgeries, and his care was made even more complex due to the need for kidney dialysis, blood thinners for DVT clots, a ventilator due to pneumonia, antibiotics for various infections, and treatment for an abnormal heart rhythm. 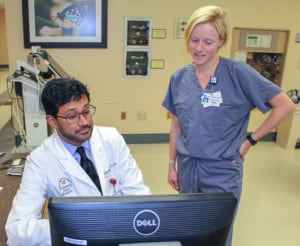 Dr. Velamuri said the fact that Samir was able to survive and return to his own home is due to the Burn Center’s interdisciplinary approach and a dedicated team that includes doctors and nurses in intensive care and burn, rehab therapists, pharmacists, nutritionists and social workers.

They come together to treat the most severely burned patients from Tennessee, Arkansas, southern Missouri, Mississippi and Kentucky. The Firefighters Burn Center is the only facility of its kind in a 400-mile radius verified by the American Burn Association.

“We use techniques that are different and unique, and we give the patient hope,” Dr. Velamuri said. “We focus not only on life, but on function. It’s not just about the care we provide while they’re in the hospital, it’s about seeing them leave functioning as close to possible as they were before they were injured.”

For Samir’s wife Amy, that approach was a blessing. “The doctors here are amazing,” she said, recalling an early interaction with Dr. Hickerson. “He gave me a hug and told me, ‘I’ll save your husband, because you’re like my daughter. I promise you, just give me time.’ And he did. It’s an amazing hospital. I’m so happy with how they helped my husband.”

That continued with Samir’s physical therapy, as Sandra Fletchall, OTR/L, CHT, MPA, FAOTA, Burn Rehabilitation Manager, worked to rebuild his strength and give him new ways to get dressed, brush his teeth, eat, get in and out of rooms and cars, etc.

With all amputation patients, Fletchall said, “People think, ‘I can’t do it the way I used to, so I can’t do it at all.’ I tell them it doesn’t mean it’s the end, it just means it’s different, and we have to figure out the way to move forward and the best technique for them to do it.”

Samir, like all patients, had his share of struggles. “They wore me out,” he admitted. “But they got me up and going. They got me back on my feet. Hopefully I’ll even be able to walk soon.” 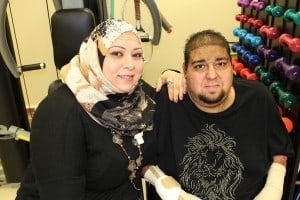 Samir headed home after over half a year at Regional One Health. He planned to continue physical therapy in hopes of being able to walk again.

“We won’t ask you to do something you can’t do, but we will ask you to do things that are hard,” Fletchall said. “I structure their environment so they have to look beyond themselves and start to engage with other patients and appreciate what they have – because it’s not about what you lost, it’s what you’ve still got and how you approach life.”

Samir will still need rehab to build strength and mobility, but Fletchall said it’s amazing not only that he survived and kept his legs, but, “He’s not going into a nursing home. He’s going home.”

And as that occasion arrived, Samir knew exactly what he was most excited to get home to.

He has a cat who he rescued as a kitten. Samir found the tiny animal wandering in a busy street, its life perched precariously in the hands of the drivers speeding by. He waded into the fray, scooped up the trembling animal and carried him to safety. He’s cared for him ever since, helping him grow from a fragile kitten to thriving cat.

In Swahili, it means Lion.

The Firefighters Burn Center provides lifesaving care for patients like Samir thanks to generous donors who support training, technology and more. To support the center, visit the Regional One Health Foundation at https://18535.thankyou4caring.org/donate.