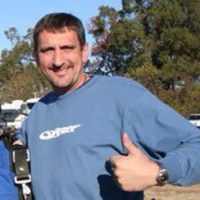 Steve was treated for multiple life-threatening injuries by staff in the Elvis Presley Trauma Center.

On April 10, 2010, while Jennifer and Steve Helffrich were spending a typical weekend with friends doing what they love — jumping out of airplanes — the unthinkable happened. Steve may not remember spinning out of control and falling some 14,000 feet to the ground when his parachute failed to open properly, but Jennifer certainly does.

As the day was winding down, Steve decided to go on one more jump with some of our friends. We had been jumping all day, so I decided to sit one out and just watch. As I heard the plane’s engines slowing down, so Steve and the others could exit, I began watching the sky and thinking about the beautiful day we had all spent together. 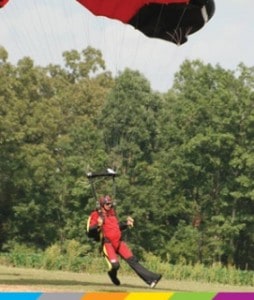 “I never really thought about or appreciated what it means to have a Level 1 Trauma Center in Memphis.”

As we were all looking up, we could see that one of the jumpers was experiencing a malfunction with his main and reserve parachutes. Both failed to fully deploy and with two partial canopies out, it caused the jumper to start spinning. We were all gasping, knowing that it meant trouble. Everyone started shouting out names of those we knew on the plane so we could figure out who was in trouble. I believe my heart actually stopped beating for a minute when one of our friends looked at me and said, “Jen, that’s your husband.” I felt like a ton of bricks hit my chest, and I had trouble breathing.

Immediately, everyone started running across the field, jumping in cars with the goal of trying to get to him. West Tennessee Skydiving is located 13 miles from Somerville surrounded by farmland and woods. We were running through the woods trying to look for any sign of where he could have landed. I started hyperventilating, fearing what we would find. Eventually, several of us came to a clearing and there he was. Steve had landed in a harvested corn field about 20 feet from the edge of the woods. When I finally got to him, I was so relieved to hear him screaming out in pain because it meant he was alive!

Steve was rushed by helicopter (Hospital Wing) to the Elvis Presley Trauma Center at Regional One Health. When I arrived, they were already working to save his life. The minutes seemed like an eternity as I waited for any kind of update on how Steve was doing.

That’s when I met Dr. Croce, who compassionately explained that Steve experienced multiple life-threatening injuries, including damage to his aorta (the most serious of his injuries), a punctured/deflated left lung, dislocated/broken right hip, and several broken ribs, during impact. He also told me Steve’s chances for survival were greatly increased because he was able to get treatment so quickly. Before Steve’s accident, I never really thought about or appreciated what it means to have a Level 1 Trauma Center in Memphis. Without this level of care so close, my husband would not be alive today. There is absolutely no doubt in my mind that Dr. Croce and the amazing trauma team at Regional One Health saved my husband’s life.