Ember had a long fight ahead of her in the NICU…and with Tracey living 2 hours away, there were times she couldn’t physically be at her daughter’s side.

It was a struggle, but Tracey got through it with support from an amazing NICU team and the ability to see Ember 24/7 thanks to our NICVIEW cameras.

When Tracey Edwards went into labor at 27 weeks pregnant, she prayed her little girl had the fighting spirit she needed to survive. Baby Ember didn’t keep her mom in suspense for long.

“The second she came out, she was already proving everyone wrong,” Tracey said. “The doctors told me, ‘Don’t feel bad if she isn’t crying or her eyes are closed; it’s because she’s so little.’ But she was wailing when she came out, and her eyes were wide open.”

Ember continued to beat the odds, and Tracey is grateful to Regional One Health’s NICU not only for helping make that happen, but for ensuring she had a front row seat despite living two hours away in Arkansas. During Ember’s stay in the NICU, Tracey could check on her 24/7 using the NICVIEW system, a camera placed over the baby’s incubator that families can watch via smartphone, tablet, computer – anywhere they have internet access. 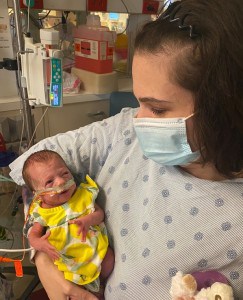 Tracey Edwards spent every minute she could with baby Ember in the NICU. When she had to be back home in Arkansas, she was able to watch her daughter 24/7 using our NICVIEW camera system.

It’s something most expectant parents don’t even think about, and Tracey was no different.

For six months, her pregnancy was normal. She set up Ember’s nursery, marveled at ultrasounds, prepared as best she could to be a mom.

But near the end of her 26th week, Tracey’s water broke. She drove herself 30 minutes to a hospital in Blytheville, where doctors called Regional One Health, which is home to Centers of Excellence in high-risk pregnancy and NICU.

“Within 30 minutes I was on my way to Memphis,” Tracey said. “The doctors were able to stop my labor, and they admitted me to the hospital.”

She held out eight more days, then started having contractions again. This time, both mother and baby were in distress.

“She was rolling and flipping and turning, and the umbilical cord was wrapping around her. She actually flat-lined, and I started having heart problems,” Tracey said. “Once that happened, the doctor said, ‘We need to make the decision.’”

Doctors performed an emergency C-section, and Ember was born weighing just over 1 pound.

“I was scared. I’m a first-time mom; this is going to be my only baby,” Tracey said. “When you’re walking into the NICU and she has the head brace on and the tubes, there are moments you’re thinking, ‘What did I do?’ I kept saying, ‘I’m sorry, I’m sorry.’” 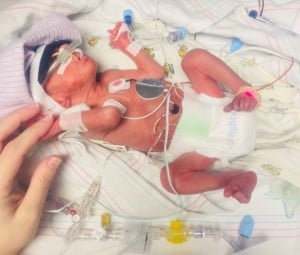 Tracey says Ember gives new meaning to the phrase “tiny but mighty.” “All those precious nurses – they put up with my baby!” she laughed. “They will tell you, she’s a spitfire. But she needed that spirit.”

One of her toughest moments came as she was being discharged.

A nurse saw her crying, and Tracey told her how sad she was to return to Arkansas while Ember stayed in the NICU. The nurse suggested she stop by to see her daughter before heading home.

“As soon as I got there, Ember’s nurse gave me a piece of paper and said, ‘Sign this if you want to have a camera so you can see your baby,’” Tracey remembers. “I know my antepartum nurse must have talked to her and told her I was upset.”

Tracey jumped at the chance. “It put a Band-Aid on not being here,” she said. “I knew I could pull her up and there’s her face. Someone has eyes on my baby at all times, and that helps.”

It also helped that Tracey had 100 percent faith in Ember’s medical team.

Doctors and nurses called her daily as they gave Ember the care she needed to grow and thrive. “They did everything they said they would and more,” Tracey said. “What they do is amazing. They saved my baby…she wouldn’t be here without God and without them.”

Just look at that smile! Ember thrived in the NICU, and around Mother’s Day, Tracey was able to take her home. “I’m eternally grateful for Regional One Health,” she said. “My best decision was coming here.”

Tracey’s praise extends to her own nursing team, who helped her through the scary week after her water broke, a painful labor, and a challenging recovery. “The nurses are wonderful, from antepartum to labor & delivery to NICU,” she said. “They were with me every step of the way, and we became like family. I love all of them!”

Still, home is where the heart is, and when Ember was released to head home to a nursery full of pink and unicorns, it was a moment of pure joy.

“I’m looking forward to my family getting to see her, and just to be able to hold her for a long period of time…to just sit there and look at her face and play with her feet and hands and belly,” Tracey said. “I’m ready for our bonding time.”

As Ember grows, she’ll learn her story – all of it. The ups, the downs, the scary moments and the beautiful ones. Tracey has chronicled it all in a memory book with pages lined top-to-bottom with photos and entries describing Ember’s early arrival and daily life in the NICU.

And there is one more piece to the book that Tracey wants to make sure her daughter cherishes: the signatures of her NICU nurses. “All those precious nurses – they put up with my baby!” she laughed. “They will tell you, she’s a spitfire. But she needed that spirit. She’s small but mighty.”

“I’m eternally grateful to everyone in this hospital,” she added. “My best decision was coming here. My mom and a lot of close friends are in the medical field, and they said this is the place to go. Now, I see why. I know why.”

You can support lifesaving care for patients like Tracey and Ember! Visit  regionalonehealthfoundation.org to learn more.