Mickey Ashburn has been with Regional One Health for an amazing 55 years, most of them as a registered nurse in our Trauma Operating Room.

Mickey works with a team that provides lifesaving care for the most critically injured patients by making sure they can get the emergency surgery they need within minutes of arriving at the Elvis Presley Trauma Center.

It’s hard work, but it hasn’t hardened her heart – she says she is inspired every day by a group of colleagues who genuinely care about their patients and each other.

If you ever worry that loyalty is an outdated concept, you might want to meet Mickey Ashburn.

Mickey started her career at Regional One Health September 5, 1967 and has spent most of that time in the intense, exhausting field of trauma care.

Yet nearly 55 years after first walking in the doors of what was then John Gaston Hospital, she remains grateful for the opportunity to care for others and passionate about serving as a member of the elite trauma operating room nursing team at the Elvis Presley Trauma Center.

“It gets in your blood, and you don’t want to leave,” she said. “At another hospital, many of our patients wouldn’t have a chance. Here, they have the best chance at surviving a traumatic injury. Personally and professionally, that’s very rewarding. I just don’t want to work anywhere else.” 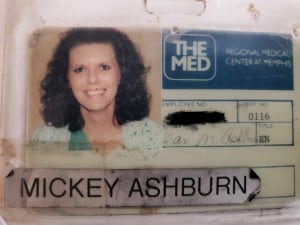 Mickey started at Regional One Health in 1967 – an amazing 55 years ago! “It gets in your blood, and you don’t want to leave,” she said. “I just don’t want to work anywhere else.”

Mickey started as a clerk in the hospital’s chemistry lab, and a couple years later moved over to insurance and collections.

That’s when Shelby State Community College (now Southwest Community College) started offering classes at the hospital. Mickey talked a friend into signing up with her, taking English and Microbiology.

She enjoyed it, and when she learned her employer would reimburse anyone who wanted to pursue a degree as long as they got passing grades and committed to working at the hospital for two years, she jumped at the chance.

At the time, she was a young mom, and money was tight. “If it hadn’t been for this hospital, I would have never been able to afford to go to nursing school,” she said. “They made it possible, and I always felt I owed the hospital a lot because they put me through school.”

Mickey earned her nursing degree and went to work in the Labor & Delivery Center. She later transferred to the operating room, and then in 1990 took her current position in Trauma OR.

There, she joined a team that has earned a national reputation as the best of the best. “We’re the only level-1 trauma center in the area, so everything comes here – motorcycle accidents, gunshot wounds, bad car accidents, pedestrians who were hit by a car. When the farmers are planting and bringing in their crops, we see a lot of farming accidents,” Mickey said.

Unlike many hospitals, where cases are allocated by specialty – cardio, orthopedics, neurology, etc. – the Regional One Health Trauma OR team does it all. 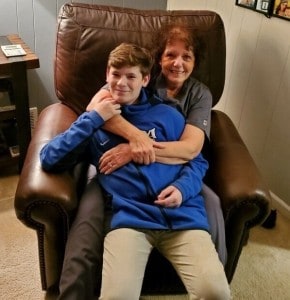 Family is a huge motivator for Mickey. Her grandson lives with her, and she wants to do everything she can for him: “He keeps me going. I want to make sure he has what any other child has and know that I can provide that for him.”

“You never know what’s going to come in, and you have to be ready for that,” Mickey said. “A lot of people think that after you’ve been here a while you become callous to certain things, but you don’t. You learn to be able to do what you need to do to care for patients, but that doesn’t mean it doesn’t affect you. You realize that’s someone’s mother, father, brother, sister.”

For Mickey, its easy to put herself in the shoes of a worried loved one waiting for news.

Her oldest son has a rare genetic condition called situs inversus, where the organs are reversed inside his body, and he is also a cancer survivor. “I know what it’s like to have someone you love in the OR for six or seven hours, and it’s not fun,” Mickey said. “I do try to make the extra effort to keep in touch with my families and keep them updated.”

She offers to call every hour with an update; or to let them rest and call only if there is a change. If she knows she’s about to get busy and may not be able to call, she lets them know that too.

“Sometimes I think it’s a lot harder to be that person waiting to hear something than that person asleep on the table,” she said. “It takes so little to at least keep them in the loop.”

Along with communicating with families and assisting with patient care, Mickey helps make sure the operating rooms are stocked with supplies and equipment so patients can be taken into surgery within moments of arrival – a process she repeats countless times each 12-hour shift. 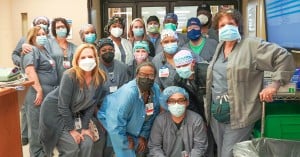 Mickey is grateful for colleagues who give their all to patients and one another. “Every day I see that there are people who care and who work so hard to help others, and I’m grateful to be a part of that,” she said.

It’s grueling work, but Mickey, who turns 75 in November, welcomes the challenge. “If I felt I was at a point where I couldn’t do it or I was exhausted in mind, body or spirit, I would retire,” she said. “But as long as I can do the job and give 110 percent, I’ll be here.”

Her motivation is not just professional, but personal.

Mickey’s grandson, now 12, has lived with her since he was little. “He keeps me going. I make it to most of his basketball games, even if sometimes it’s only for half. He told me I need to get my bike fixed so we can ride together,” she said. “I want to make sure he has what any other child has and know that I can provide that for him.”

So she’ll continue to give it her all, not just due to loyalty to her family, or to her employer, or to a group of colleagues who support one another 100 percent, but to a higher calling – one that gives her hope that there’s still plenty of good in the world.

“I wouldn’t trade the years I’ve been here for anything,” Mickey said. “I’ve seen new life come into the world, and unfortunately I’ve seen life when it’s leaving. It’s been an experience that has made me grow not just in my profession, but in my faith in people. Every day I see that there are people who care and who work so hard to help others, and I’m grateful to be a part of that.”

Our Elvis Presley Trauma Center provides lifesaving care for thousands of patients every year. To support a team that is Specializing in Tomorrows for families from across the Mid-South, go to regionalonehealthfoundation.org.