All Foundation News | All System News
2021-11-29T17:45:55-06:00November 29th, 2021|
PreviousNext
“Our mercy was with Regional One Health:” Lives like Max Courtney’s are saved thanks to immediate access to critical care at the Elvis Presley Trauma Center

When Regional One Health’s Elvis Presley Trauma Center is notified of an arriving patient, a team of surgeons, physicians, nurses, anesthesiologists, respiratory therapists and other highly trained, highly skilled professionals jumps into motion, no matter what the time of day.

Max, playing for ECS with his father Bill on the sidelines as head coach, took a hard hit to the side and went down. He got up briefly, took a few unsteady steps, then collapsed into a bank of chairs. The team doctor directed him to go to the hospital to have his injuries assessed.

On the way to the hospital, Max told his mom Lisa that something wasn’t right.

His intuition was correct: he flatlined at the hospital, and physicians there told Lisa that Max needed to be flown to Regional One Health where he could receive the high level of medical care he needed. As a Level-1 Trauma Center, our Elvis Presley Trauma Center cares for the most severely injured patients from a 150-mile radius of Memphis. 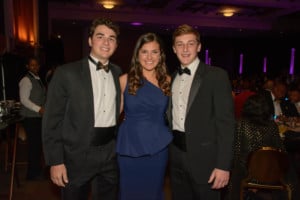 The Courtney family is grateful for Max’s lifesaving care. “It’s a fabulous hospital with caring and professional nurses and doctors and administrators and staff,” Bill Courtney said. “There’s a culture of compassion and care and concern that’s just unmatched.”

They had placed their faith in exactly the right place.

Because the Elvis Presley Trauma Center has experts and resources available around the clock to treat complex, serious injuries, Max was able to immediately receive lifesaving care. Dr. Lou Magnotti performed emergency surgery to stop internal bleeding, and Dr. Jerry Jones performed a procedure to address Max’s pain so he could begin the healing process.

Amazingly, just one week after his injury, Max was out of the hospital and back at the one place he knew he wanted to be. “We had a game that Friday against East High School at the fairgrounds. I knew I wanted to go to the game,” he said.

His teammates didn’t know he was planning to show up. As they realized what was happening, they rushed over to Max in a moment Bill will never forget: “I’m standing there on the 15-yard-line warming up and looking at this entire team of kids surrounding my kid, and I’m thinking, ‘He could have been dead, and here he is with his buddies on the football field a week later.’”

It’s a moment the team at the Elvis Presley Trauma Center is proud to have helped create. “It’s a fabulous hospital with caring and professional nurses and doctors and administrators and staff,” Bill said. “There’s a culture of compassion and care and concern that’s just unmatched.”

That culture, born of the belief that exceptional health care is measured not by the patients we see, but the people who walk out our doors, is why we’re Specializing in Tomorrows. To support our trauma team, visit https://www.regionalonehealth.org/foundation/giving-tuesday-2021/