All Foundation News | All System News
2021-11-29T17:45:37-06:00November 29th, 2021|
PreviousNext
“A second chance to build a life:” For Edward Apple and patients all over the Mid-South, the Elvis Presley Trauma Center has made tomorrow possible

In May of 2021, Edward Apple walked across a stage at The University of Mississippi in Oxford to receive his college diploma. It’s a rite of passage for numerous young adults every year, but for Edward and his family, it was also a time of reflection.

Because Edward Apple very easily could not have made it to that stage. 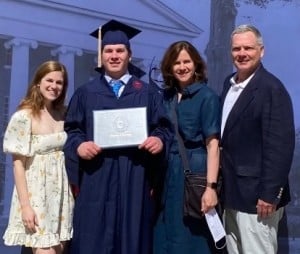 Edward Apple graduated from The University of Mississippi in May and started a job as an appraisal analyst trainee. His family says it is a perfect time to reflect on the lifesaving care he received at the Elvis Presley Trauma Center.

In 2015, Edward was a standout tennis player at Memphis University School with plans to attend college on an athletic scholarship.

One day during his summer break, he went fishing in Arkansas with a friend. On the way home, his friend lost control of his vehicle, and the crash sent Edward through the windshield.

His friend was able to call for help, and the 911 call was fortunately answered by a flight nurse who was familiar with the remote area where the crash had occurred – a blessing, as any delay in receiving critical medical care could have had dire consequences.

Instead, he was promptly taken to Regional One Health’s Elvis Presley Trauma Center, where a multidisciplinary team of experts stood ready to provide lifesaving care.

As a regional Level-1 Trauma Center, the Elvis Presley Trauma Center is an essential resource for patients like Edward who suffer serious injuries many miles from the nearest major medical center. It serves patients from a 150-mile radius of Memphis including parts of Tennessee, Arkansas and Mississippi, with the ability to treat the most critical, complex injuries.

Thanks to highly trained specialists, world-class resources, and support from the Regional One Health Foundation, the trauma center is a source of hope and healing for the entire Mid-South. 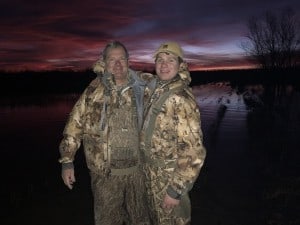 Edward is grateful for the chance to spend time with family, going on hunting trips with his dad and doing just about anything outdoors. “He’s had a second chance to build a life,” his mom Margaret says.

That was crucial for Edward, who had suffered a broken collarbone, fractured cheekbone, collapsed lung and severe brain injuries. He was unresponsive when he arrived at the trauma center and did not regain consciousness for weeks. At first, it appeared he might require skilled medical care for the rest of his life.

Fortunately, Edward, his family and his medical team had other ideas.

Edward’s road would not be an easy one, but with expert medical care and the support of his parents Ed and Margaret and sister Lizzie, he continued to make progress. Five months after his accident, he was able to hit tennis balls with one of his high school coaches. He returned to class at Memphis University School, graduated, and went onto college.

Now, Edward is proof of how expert trauma care can change the trajectory of a person’s life.

These days, he loves spending time with family and friends and doing just about any outdoorsy activity, and earlier this month started a new job as an appraisal analyst trainee for a Memphis firm. “We have really been thinking about his accident a lot during these weeks,” Margaret said. “It’s the perfect time for him to reflect on how thankful he is for having this second chance to build a life.”

The family is grateful that the Elvis Presley Trauma Center team, with their resources, expertise and compassion, was there in their time of need.

“It’s difficult to overstate how thankful he is to have been the beneficiary of years of medical training and administrative forethought brought together to create the world-class trauma center at Regional One Health,” Margaret said.

“We spend a lot of time together as a family just knowing that every moment is important.”

Visit https://www.regionalonehealth.org/foundation/giving-tuesday-2021/ to support the trauma center as it fulfills its mission of Specializing in Tomorrows for patients across the Mid-South.