All Foundation News | All System News
2019-10-04T06:57:55-06:00October 9th, 2019|
PreviousNext
When Scott Finney was hurt in a training ride, doctors helped him heal without dangerous drugs that could undermine his goals

Scott Finney’s life was right on track. He had gotten married over the summer, and he was training for a 100-mile century ride. When he got on his bike August 25, words like “collapsed lung” and “broken ribs” weren’t on his radar. 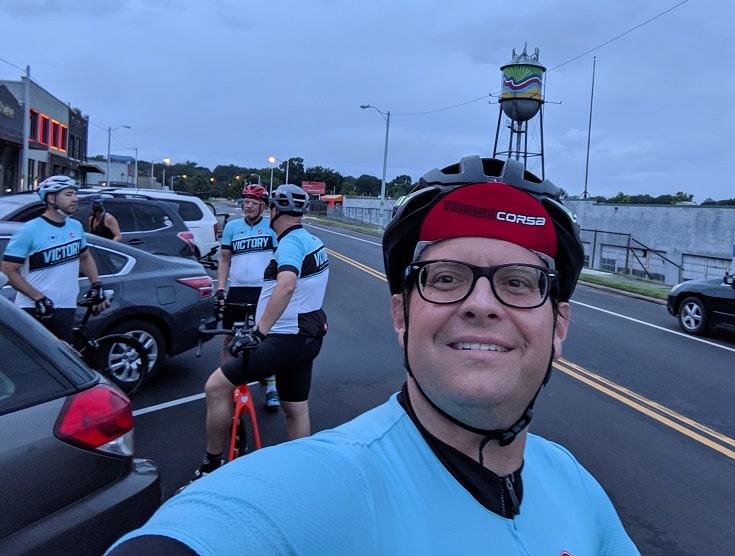 Scott Finney had no idea what lay in store when he set out for a training ride August 25. He would end up at the Elvis Presley Trauma Center with broken ribs and a collapsed lung.

After a scary crash made those terms Scott’s new reality, Regional One Health helped him heal – and did so without opioids and the dangers they pose to a life well-lived.

“I’ve heard the horror stories from the traditional treatment, where you’re pumped full of heavy narcotics and keep pushing the button,” Scott said. “I’m grateful I had the option to avoid that, and I’m excited it exists right here in the city where I’ve lived in my entire life.”

His wife Sarah, a pharmacist, was impressed when opioids weren’t the first choice, even in the trauma center. “It was very refreshing to have an alternative, and I really think it helped him not go down a different road,” she said.

Scott’s medical journey started during a typical Sunday morning ride. “The streets were a little slick, and the guy in front of me slid out when we turned. I tried to avoid him, but I could feel myself going down. I didn’t hit him – it was just me and the asphalt.” 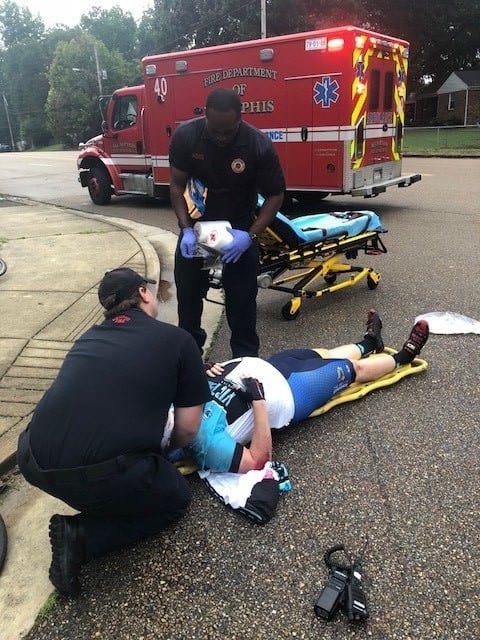 When paramedics rolled Scott onto a stretcher, “The best way I can describe it is I felt my ribs reshuffling and moving around,” he said.

Scott has been cycling for years, with two century rides and a cross-country charity ride under his belt.

He knows falls are part of biking, so he wasn’t shocked by what happened – but he knew he was badly hurt. It was hard to breathe, and when paramedics rolled him onto a stretcher, “The best way I can describe it is I felt my ribs reshuffling and moving around.”

At the Elvis Presley Trauma Center, he learned he had a broken collarbone, six broken ribs, blood between his lung and chest wall, and a collapsed lung. “Everyone who looked at my chart saw bike crash and thought motorcycle because of the extent of the injuries,” Scott said.

Agony quickly set in, but Scott was hesitant about taking narcotics. Sarah shared his concerns: “Opioids can lead to a lot of things – not just addiction, but side effects – and it can go from bad to worse very quickly,” she said.

As it turns out, a like-minded physician would soon be at Scott’s bedside.

Jerry Jones, MD, director of Regional One Health’s Acute Pain Service, is a leader in the use of continuous peripheral nerve blocks, where a tiny catheter delivers non-addictive local anesthetic – like what a dentist uses – to nerves in an injured area.

Dr. Jones believes the best way to fight opioid addiction is to never expose patients to the drugs. Even a short course of opioids can spark dependence, and athletes like Scott aren’t immune – in fact, sports injuries are often a gateway: “You’d be surprised,” Dr. Jones said. “Being a highly-motivated, highly-competitive person can actually be a risk factor.” 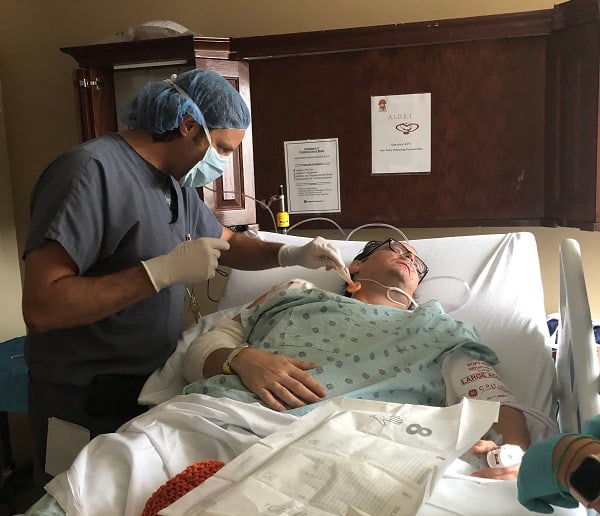 Dr. Jerry Jones prepares to insert a continuous peripheral nerve block. The procedure relieves acute pain without the use of potentially dangerous opioids.

Scott was determined to avoid that risk. Nurses wheeled in an ultrasound and Scott and Sarah watched onscreen as Dr. Jones guided a tiny catheter into a cluster of nerves: “It was unreal,” Scott said. “It was like, ‘This is the area that hurts? Well, then we’ll turn off the pain.’”

He’d need the relief to take part in rehab, which grew urgent when X-rays revealed blood in his lung. Doctors inserted a suction tube, and the next day, a surgeon delivered “the come to Jesus talk:” Scott needed to help the tube clear his lungs if he wanted to avoid major surgery.

“As strong as my family was, surgery really scared them, so it was a real wake-up,” Scott said. “After that, I was doing coughing exercises every hour and pushing to make my lungs stronger. It was just a battle – this is what I’ve got to do, and hopefully I can do enough.”

Dr. Jones said nerve blocks are designed to promote that kind of fighting spirit, since they keep patients alert and comfortable. “With rib fractures, if a patient is involved totally in their therapy, they avoid complications and actually go home faster by several days,” he said. 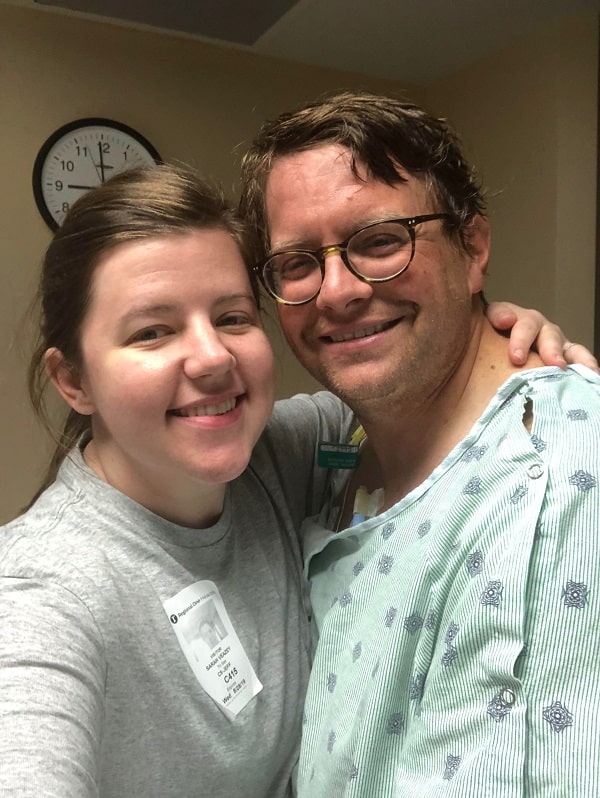 Scott was supported by his wife Sarah throughout his ordeal. “She was amazing. I am blessed to have her and our families in my life,” he said.

And just like on his bike, Scott pushed himself across the finish line with the support of a great team.

“Every single person I interacted with in the health care world – the ambulance driver, everyone in trauma and during my entire stay at Regional One Health – was awesome,” he said.

“It was a positive experience, even with all the uncertainty and worry,” Sarah said. “We were in the right place. Regional One Health is where you need to be when you have trauma. You hear about it, but you don’t really realize it until you need it.”

They credit the acute pain team with getting Scott home in just six days. “I was in disbelief about how effective the nerve blocks are,” Scott said. “They gave me painkillers as-needed, and I have yet to take one. All of us – me, my parents, my pharmacist wife – are amazed.”

Scott is also amazed by the strength of his loved ones, especially his wife.

“We just got married June 15, so my crash was our 10-week anniversary. I don’t think she was expecting our marriage to never have a crisis, but I don’t know that she expected it immediately,” he said. “She was amazing. I am blessed to have her and our families in my life.”

Now, he’s ready to get back on his bike as soon as his doctors clear him – although if Sarah has any say, he’ll be doing so with a little extra gear.

“They doctors say he can ride again as soon as he’s comfortable, but I don’t know if I’m comfortable,” she laughed. “Is there some sort of bubble wrap contraption he can use along with a helmet?”

The Elvis Presley Trauma Center and physicians like Dr. Jones provide hope and healing to patients every day. To support the lifesaving care provided at Regional One Health, visit regionalonehealth.org/foundation.