All Foundation News | All System News
2019-02-18T08:24:58-06:00February 13th, 2019|
PreviousNext
The Hall family celebrates four miracles and many reasons to keep the laughter going thanks to Regional One Health

Jennifer Farrell has the gift of making people around her laugh. A warm and jovial person, she frequently joins in with her own laughter. Her candor and wit are her superpowers, her saving grace that pulls her through complicated times.

She and her babies have overcome numerous complications — more than most of us can fathom. 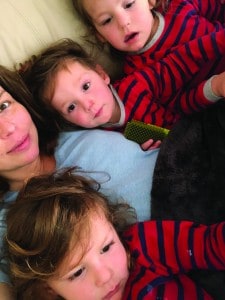 Jennifer traveled to Regional One Health all the way from London when she learned she was pregnant with triplets Bear, Leo and Wylder.

Additional hardships still lie ahead, but she’s ready. It’s what she came to Memphis for — to fight for life.

They have a 10-month-old son, Phoenix Moon, who has started to crawl and wants to join in with everything his three older brothers are doing. Baby #4 was born at Regional One Health, just like his brothers, though he arrived about three weeks early.

“I believe with all my heart that if I was at another hospital, we would have no sons,” says Jennifer.

“The entire medical team took time to bond with us, and they knew all four of my babies, even when they were still in my belly. They became part of our family.”

Have we mentioned that the three older brothers are identical triplets?

Leo, Wylder and Bear were born in November 2014, 10 weeks early, with 100 percent of the same DNA, the same fingerprints, and the same body features. One egg, one split … and then, another split.

The occurrence of the same egg splitting to produce three genetically matched embryos is, shall we say, uncommon: a one in 200 million likelihood.

There’s only one thing that can be more uncommon for this family along with the Regional One Health medical team to have overcome. 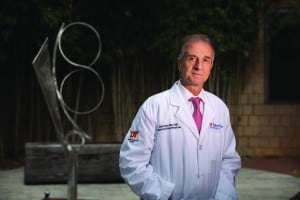 Dr. Giancarlo Mari’s High Risk Obstetrics team has the expertise and compassion to care for patients like Jennifer, whose pregnancy with identical triplets is a one-in-200 million occurance.

Survival of all three of these “doll babies,” as Jennifer calls the triplets, is beyond rare. A better word is “miraculous.”

Carrying three identical triplets is a pregnancy fraught with difficulties. Chances are good that one or two of the babies won’t survive. That’s why Jennifer and Ashton’s obstetrician in London sent them across the Atlantic to Memphis — to Dr. Giancarlo Mari and Regional One Health’s Center for High Risk Pregnancy.

“I called Regional One Health when I was eight weeks pregnant and still in London,” recalls Jennifer. “I told them I was coming and they said, ‘Good, we have time to prepare for you.’ They had a whole plan together for us by the time we arrived at 13 weeks pregnant. They were fully prepared.”

Jennifer is in awe of what she calls a highly trained medical team with heart. It’s one thing to scientifically know about women’s bodies and how to keep babies alive. It’s a gift when the experts also compassionately care about their patients.

“My medical team at Regional One Health had so much love to give us,” she says. “They all cared — every single person, from Dr. Mari to the lady taking out garbage. Everyone had such good chemistry and truly looked out for us.”

Her medical team for the triplets’ delivery plan was 40 people large. Despite having offices in separate locations on the Regional One Health campus, they convened regularly in a common space to update each other on the family’s progress. They held weekly meetings with Jennifer and Ashton and taught them everything they needed to be aware of in a high-risk pregnancy. 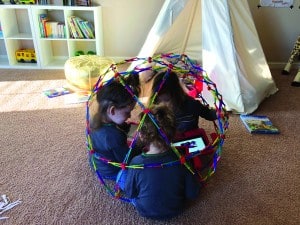 “We communicate the same we always have, even when they were in my belly,” Jennifer says of her triplets. “My guys have always told me what they needed through their hearts.”

“My sons and I would not be alive today if it weren’t for this team … none of my four babies,” says Jennifer. “They have an awesome team at Regional One Health.”

This past spring, Jennifer and Ashton learned that Leo, Wylder and Bear are autistic. The boys have become non-verbal, but Jennifer doesn’t need words to communicate with her little pack.

“We communicate the same we always have, even when they were in my belly,” she says. “My guys have always told me what they needed through their hearts.”

She laughs as she shares that on any given morning at 6 a.m., one of the boys will want a cookie. She’ll tell him it’s not cookie time yet. One of the other boys will catch on and appear at his brother’s side in support of cookies. She’ll tell both it’s not cookie time. This attracts the third triplet and soon she’s got six little hands tugging at her and gesturing. Who can blame her when she passes out three gluten-free cookies?

“They have a pack mentality,” she says with love.

Her final thoughts? “I want people to know that we’re going to be OK. We’re alive because of Regional One Health.”