As a member of our security team, Kenneth DeBerry is always vigilant for threats – but he’s also on the lookout for people who could use a helping hand.

Since security officers are the first faces visitors see when they arrive at Regional One Health, they are counted on to create a good first impression and help people find their way around.

Kenneth has done that and more, making an impression on patients and families for his kindness and reassuring demeanor.

For Kenneth, that means more than constantly being alert to potential threats. His head is also on swivel for frightened, overwhelmed visitors who look like they could use a friend.

“Our purpose is to provide security for the hospital – for patients, employees and visitors – and to make sure everyone goes home safely to their family,” Kenneth said. “But we also want to make visitors feel comfortable and welcome. We try to make them feel at home.”

It means members of our security team must embody traits that wouldn’t seem to fit together.

They have to be stern enough to discourage dangerous behavior, yet friendly enough to provide a good impression of the hospital as the first faces visitors see.

They must be tough enough to respond to security issues, yet compassionate enough to walk at the side of frightened families who need help finding their way around. 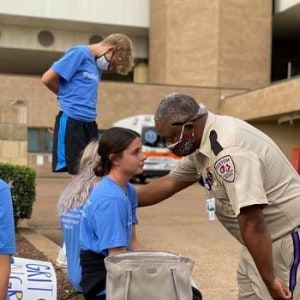 The family of one Regional One Health patient called Kenneth “a true angel” for the support he offered. “I put myself in their shoes and tried to reassure them,” Kenneth says. “That’s what we’re here for.”

They must be suspicious enough to recognize people with bad intentions, yet big-hearted enough to extend the gift of friendship.

As the COVID-19 pandemic raged, a worried family arrived at Regional One Health. Their son Holden had been seriously injured in an accident, and they were from out of town, unfamiliar with Memphis and overwhelmed by the sudden trauma. Then, they say, they met an angel.

As Holden’s sister wrote on social media, “He touched my whole family in a way I cannot even explain. Kenneth guided my parents and kept their spirits up their entire stay. He led them through the hospital when they had no idea where they were, checked on Holden every day he was at work, was a shoulder for my parents to cry on, encouraged them when they felt down and so many other things. He was a true angel through this terrible time.

“He touched the hearts of my whole family and we will consider him family from now on.”

“I was just drawn to them,” Kenneth said. “There was something about them. They were here every day, and his mom was so nervous it looked like she could bite her nails off. I put myself in their shoes and tried to reassure them. I told them they were in the best place they could possibly be, getting the best possible care.”

He sees that sort of compassionate outreach as part of his mission as a security officer. “That’s what we’re here for,” he said. “You want to be a friend to someone whenever you can.”

While COVID-19 has made that more difficult, Kenneth hasn’t shied away from the challenge.

In fact, he applied for the position when the pandemic was already underway, knowing it would include interacting with the public and helping transport COVID-19 patients within the hospital. 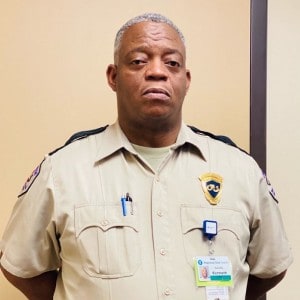 Kenneth says meeting and assisting new people is the best part of his job. “Sometimes people just need someone to ask if they need help,” he said. “It’s a pleasure to be able to help them.”

Despite the risks, he realized immediately Regional One Health was a place he wanted to work, and clearly, the feeling was mutual. “When I was interviewed by my managers, they told me, ‘To work here, you have to be a special person,’” he said. “After we talked for a while, they left the room. Not even five minutes later, they told me I had the position.”

Kenneth was assigned to circulate throughout the campus, which means he comes in contact with a lot of people. Rather than being nervous about exposure, he says the new faces and chance to meet new people is one of his favorite parts of the job.

Bottom line, Kenneth said he trusts his supervisors and team to keep him safe. Managers brief the officers before each shift on safety guidelines, whether that be a personal protective equipment recommendation or which elevators are designated for COVID-19 patient transport.

Kenneth is unfazed by the challenges the virus adds to an already challenging job, but he does acknowledge he’s looking forward to a day when human interaction is a little more normal. “The hardest part is not being able to smile at people,” he said. “But hopefully you can tell by the eyes, even with the mask on.”

Indeed, despite the mask, the uniform, the badge and a head that’s always on swivel, Kenneth never wants to forget it’s still possible to let kindness shine through.

“It’s easy for me to put myself in other people’s shoes, and to know that sometimes people just need someone to ask if they need help. They’re not sure who to talk to, but when you reach out, they’ll open up,” he said. “It’s a pleasure to be able to help them.”