David Cummings was out for a morning jog when he was struck by a hit-and-run driver.

They used an innovative procedure to stop bleeding in Cummings’ pelvis so they could perform surgery to save his life.

No one knows exactly what happened the morning a hit-and-run driver struck David Cummings as he jogged through a springtime drizzle.

He was on a street that wasn’t part of his typical running route. There were pieces of a car scattered around him, but police were never able to trace them to a suspect. Cummings himself, who suffered potentially fatal injuries, doesn’t remember what happened.

But what the 60-year-old FedEx employee does know with 100 percent certainty is he wouldn’t be here today if it weren’t for Peter Fischer, MD and Dina Filiberto, MD, along with the rest of the team at Regional One Health’s Elvis Presley Trauma Center. 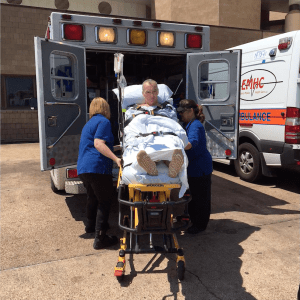 David Cummings’ prognosis was grim after he was struck by a hit-and-run driver.“Patients with his type of injury have really a less than 5 percent chance of survival, said Dr. Peter Fischer.

Cummings, who is originally from Scotland but has lived in Memphis for over 20 years, often jogged the city’s streets.

But a morning jog April 22, 2017 didn’t go as planned – though he may never know exactly what happened.

“There’s a bunch of theories. It was raining, and I’d been known to run from downtown all the way across the island,” Cummings said.

“But where it happened is quite strange – it’s not a street I would normally be on. There were so many bits of car there, it’s a complete mystery how they could not have traced it or found out who did it.”

When Cummings arrived at the trauma center, Dr. Fischer, a trauma and critical care surgeon, could tell right away his prognosis was dire.

“It was quickly apparent he was dying from bleeding in his pelvis, which is a very difficult thing to operatively control,” Dr. Fischer said.

“Patients with his type of injury have really a less than 5 percent chance of survival.”

Dr. Fischer knew it would be dangerous to move Cummings to a surgical suite, so he opted to keep him in the trauma bay for a relatively new technique that involved placing a catheter in Cummings’ artery, running it up to his aorta, and blowing up a balloon. That stopped the critical bleeding in Cummings’ pelvis so he could be moved to an interventional radiology suite.

There, Dr. Filiberto operated on the intra-abdominal injuries that also threatened Cummings’ life.

It is a series of split-second decisions that Regional One Health’s trauma team makes every day. 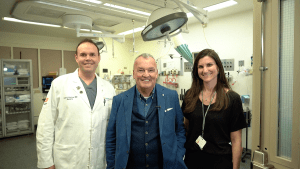 “These guys saved my life,” Cummings said of Dr. Peter Fischer and Dr. Dina Filiberto. “That should have been my final day, but instead it was the beginning of a new day.”

As the only Level 1 Trauma Center in a 150-mile radius, the Elvis Presley Trauma Center cares for critically injured patients from all over the Mid-South.

Highly-trained specialists like Dr. Fischer and Dr. Filiberto are available around-the-clock to provide immediate medical care to thousands of patients every year.

It proved to be lifesaving for Cummings, and he said it was important to him to visit the trauma team to say thank you.

“It’s too easy to walk away and not recognize and acknowledge everything that Regional One Health has done for me,” he said.

But for Dr. Fischer and Dr. Filiberto, seeing Cummings living a normal life is reward enough.

As Dr. Fischer noted, “It’s amazing how one moment can have such profound implication for someone’s life. But at least he’s here, he’s talking to us and he’s alive.”

To support the lifesaving work of our trauma team, visit regionalonehealth.org/foundation.