If it keeps you up at night, it’s probably on Ashton Anderson’s to-do list.

As Regional One Health’s Safety Officer, it is Anderson’s job to think about and prepare for the nightmare scenarios that can strike a community. 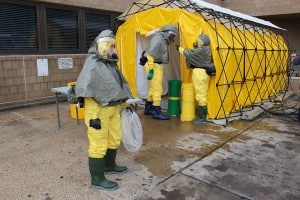 By doing so, she hopes Memphians can rest easier knowing skilled, prepared professionals are ready to respond to any crisis.

“There is someone at Regional One Health and every hospital in the city who was hired to think about the dangers and what the community needs. We have the equipment, appropriately trained staff, and plans ready to go at a moment’s notice,” she said.

Last month, Memphis’ city-wide disaster drill tested those plans, focusing on decontamination and mass surge, i.e. when a hospital gets a huge influx of patients all at once. Both are crucial at Regional One Health, since it is the level one trauma center and burn center for the entire region.

“When people hear about an active shooter, terrorism, a building collapse – anything with a lot of serious injuries – in this area, they’re coming to Regional One Health,” Anderson said. “We are going to take care of them. We don’t just hope for the best, we have a plan and we test it.” 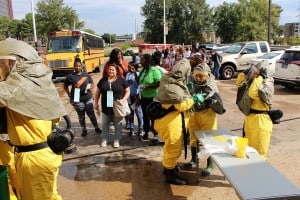 Volunteers posed as patients to test Regional One Health’s ability to care for a mass influx of victims with serious injuries. All said, the hospital triaged 54 patients during the drill.

The drill started with reports of a chemical release at AutoZone Park.

Officials established an incident command center and set up a decontamination team in the ambulance bay. Patients soon flooded in with respiratory and skin issues as personnel from every department worked to accommodate the influx. In two hours, the hospital triaged 54 patients.

Anderson tried to create as realistic a scenario as possible so hospital personnel were training in the type of conditions they would face in a real disaster. “I believe in very high-level simulation,” she said. “You want to feel a little panic; a little stress.”

She recruited volunteers to act as patients, outside doctors and nurses and family members of victims. She encouraged the volunteers to act the part: “Putting a real person in someone’s face is much better than handing them a piece of paper,” she noted.

While the drill may have been designed to test reaction to chaos, it was based on a well-planned methodology. “Emergency management is a system: what we do, how we do it, what equipment and staff and resources are needed,” Anderson said. “From that you create the drill to test your plan, and then you take what you learned and tweak the plan.” 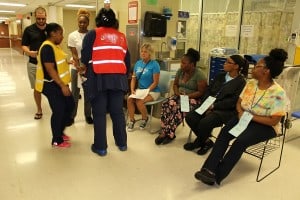 “Everyone has a role to fill, and whey they hear ‘mass surge,’ everyone should react,” said Regional One Health Safety Officer Ashton Anderson.

The city-wide drill, which involves all local hospitals as well as fire and police services, proved to be an excellent chance to do just that.

Anderson said she was pleased with the results because they highlighted both excellent work and areas that need improvement.

“You never want to say it was a total success – that kind of thinking is dangerous – but we did really well,” she said.

“It’s OK if something doesn’t work during a drill. You want to know what fails in an exercise, not during a real disaster. You find your holes so you can patch them.”

She said all departments did a great job of sending staff where they needed to go.

During a crisis, it isn’t just trauma and emergency personnel rushing to treat patients.

Security puts the facility on lockdown. Food & nutrition sends water to the decontamination team and food to family assistance. Labor & delivery providers treat the walking wounded. Patient transport moves existing patients out of trauma to other parts of the hospital. 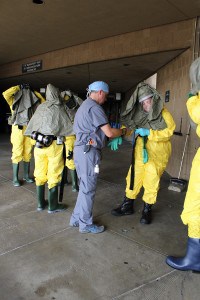 The decontamination team has a hot, stressful job. One lesson learned from the drill is that the team needs to be expanded.

“Everyone has a role to fill, and when they hear ‘mass surge,’ everyone should react. The idea is to get into that automatic mode, and practice is key,” Anderson said.

As for lessons learned, while the decontamination team performed great, she said it needs more manpower to handle a full-scale emergency. “It’s hot, stressful work, and people need a break. The team we had did great, but we’d be even more efficient with more people.”

Anderson is already working to beef up the decontamination team and plans a follow-up drill on the process soon. She’s also looking into drills on infectious disease and active shooter response.
Between drills, she focuses on education.

She’s creating checklists that will be readily available so employees can quickly see what they need to do during a crisis, and always has an open door: “If someone has a question or realizes something isn’t working, I want to know so I can help find the solution,” Anderson said.

It is a to-do list that may seem daunting – even a little scary – but Anderson says the planning and preparing is the very thing that gives her peace of mind that the city’s emergency responders are ready for anything.

“If you think you’ve got the plan perfect and you can stop drilling, you aren’t looking hard enough, and you’re ignoring the fact that threats evolve,” she said. “We never ignore that, and we never stop working to make our plans the best they can be.”