Jason Troutner is a young man, but he has already been in a cast over 60 times due to multiple surgeries for clubfoot and injuries from competing as a gymnast.

It’s a challenge, but Troutner is more than up to it: He’s a mechanical engineer and, even more importantly, the embodiment of the kind of indomitable spirit that can change the world.

He’s starting by creating Cast21, the company behind a new orthopedic device that aims to heal bone fractures while eliminating the inconveniences of a traditional cast. But before patients can start wearing the breathable webbed sleeve that gets compared to Spiderman, it must be tested and perfected.

For that, Regional One Health has stepped to the plate. 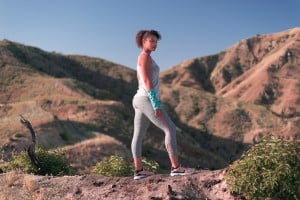 The orthotic device designed by Cast21 is meant to be less cumbersome, so users can remain active while they heal.

“It’s outside the norms for a health care system to give access to innovators,” acknowledged Alejandra Alvarez, Center for Innovation Director. “Health care is typically a closed environment – to play it safe, people stay within the lines. But we believe care is not just about what’s good for Regional One Health, it’s about what’s good for the health care industry. That’s why Regional One Health, with a hospital that treats the sickest population and has the most to lose, is thinking outside the box.”

The center opened in 2016 with the idea that innovation is uniquely important in health care, where finding a better way can literally mean the difference between life and death – but where there is often a business-as-usual approach.

Alvarez works with companies that use disruptive thinking to develop the revolutionary tools, treatments and technologies of tomorrow. The Center for Innovation gives them insight into the industry, a place to test products, and a chance to develop their go-to-market strategy.

With Moy standing in as patient, Hogg showed how to measure the palm and forearm to find the size of orthotic needed, then slid Moy’s arm through the flexible sleeve.

She shook a separate packet containing resins until its frangible seams burst to mix the liquids, then let the webbed sleeve fill with the blue fluid – the orthotic comes in a rainbow of colors, even tie-dye – for 90 seconds. 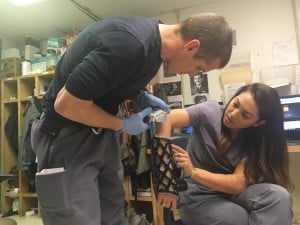 In three minutes, the liquid was lightening in color as it gelled. Within 10 minutes, the shell cured, and she removed the wrap. The orthotic was in place.

Later, Hogg showed how doctors can remove the orthotic with no cast saw or mess.

The surgeons raised questions – in trauma, patients are lying flat, not sitting; some might refuse a certain color of device – and Hogg and Moy deftly found answers, like angling a supine patient’s arm downward to fill the sleeve and labeling the kits by color so patients get a choice.

Moy said Cast21 thrives on that sort of interaction: “Feedback is extremely valuable to us. We’ve already made changes in light of what they’ve said previously.”

Now, they’ll get more input from Regional One Health patients to perfect a product that they say can have many benefits over a traditional cast.

Hogg worked on a design for the FDA Class I medical device that is based on her biomechanics background and a series of tests aimed at ensuring it stabilizes and immobilizes the joint while allowing dexterity. The waterproof, breathable webbed sleeve has a rigid exterior but cushiony interior and is lighter than a regular cast, with an anatomical fit. Moy said the goal is to reduce inconvenience, itch, odor and risk of infection. 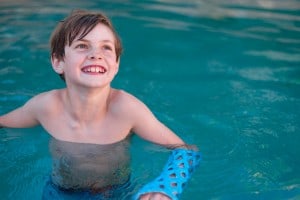 The webbed design created by Cast21 is breathable, flexible and comfortable – and can even get wet.

The product even preserves the two things people actually like about traditional casts: “You can still pick your color, and you can still sign it,” Hogg laughed, adding the device draws comparisons to body armor and Spiderman. “We like that empowering notion!”

Alvarez is equally excited about the product, not only for what it offers patients, but how it can help the Center for Innovation grow to support more game-changing improvements. “We’re successful if they’re successful,” she said.

And what is success?

For Cast21, it’s going to market and expanding their reach. “This technology can scale to address indications across the body,” Moy said.

For the Center for Innovation, it’s growing, with the help of partners and the Regional One Health Foundation, to support more new ideas. “We want to build an ecosystem in Memphis that attracts innovators to improve health care and help the city grow,” Alvarez said.