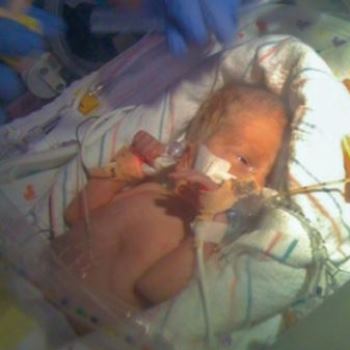 Spring break seemed like a good time for a Caribbean cruise. Sarah Davies is an elementary school teacher in Blytheville, Arkansas, so the academic calendar plays a role in any vacation planning. At 26 weeks pregnant, she was just under the cruise travel cutoff for pregnant women. Her physician gave her the OK to travel.

The cruise went well. Sarah returned home and went back to school the following week. But on the second day back at school, she didn’t feel well. Sarah had a hard time walking, so she decided to go see the school nurse who checked her blood pressure.

“She said leave now,” Sarah recalls the nurse saying that spring day in 2010. “I went to my OB. He put me in the hospital immediately.” Sarah had preeclampsia. She says now that what had been a normal blood pressure that hovered Sarah’s 2010 Eight Years Later around 120 over 60 hit 170 over 100. She stayed in a local hospital for four days and then went home and was put on bed rest. She made it a week before going back to the hospital for another two days. Her OB then made the decision to send Sarah to Regional One Health. 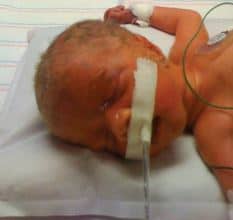 She arrived by ambulance at about 8:30 p.m. and had an emergency C-section to deliver a baby boy at 11:16 on the night of April 12, 2010. “The doctor said he looked like he had black lung even though I had two steroid shots to help with his lungs,” Sarah said. “It was like I never had them. The doctor said he may never walk, run or play sports. They didn’t tell me all of that until a couple of days later. He was pretty bad off to begin with.” Dokken had a brain bleed and a hole in his heart that hadn’t closed, although he had made progress, there was a scary moment a couple of weeks into his 38-day stay in the NICU.

Today, Dokken is 8 and obsessed with Mexican food. Sarah says that by the time he was a year old it was difficult 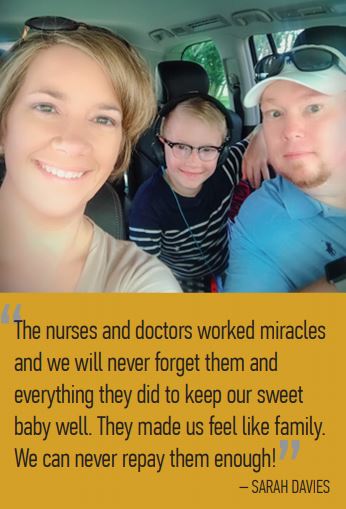 to realize he was born premature. “He was doing really well,” Sarah said. “I was out of the room and my mother was in there with him. She called for me and I ran in. He had stopped breathing. He developed an infection like a mass in his neck and he had stopped breathing.  He was purple. It was pretty scary.” He went back on the ventilator for a couple of days, regained strength and truly began his road to the moment when the Davies could take their baby home.

Of course, that didn’t mean Sarah didn’t have concerns. “I was scared to death,” she said about those first moments she and her husband had their baby at home. “He didn’t come home on oxygen or monitors. I was excited but scared. It took about a week or so to get over it. We slept in the living room and he slept next to me. I didn’t sleep for a week.” About that unique name, Dokken. Sarah says her husband is obsessed with the 1980s metal band Dokken. One of the Regional One Health pharmacists connected the dots, and about five days after baby Dokken was born, the Davies found a black Dokken T-shirt at the end of their son’s bed. “We asked where it came from and a nurse said one of the pharmacists knew immediately where the name came from and so he brought his own T-shirt from a concert,” Sarah said. “Last summer we got to meet Don Dokken, the singer. The shirt is now autographed andhanging in his room.” 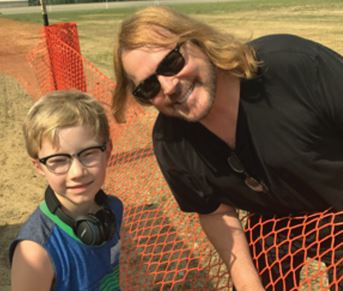 “The nurses were great. It was like a big family,” Sarah said. “He’s great now,” Sarah said. “He caught up quickly and he’s perfect. The nurses and doctors worked miracles and we will never forget them and everything they did to keep our sweet baby well. They made us feel like family. We can never repay them enough!”

Commit to raising awareness and funds by visiting
our donation website and signing up today.